Fortunes on the Shaying Flow Like the River Itself 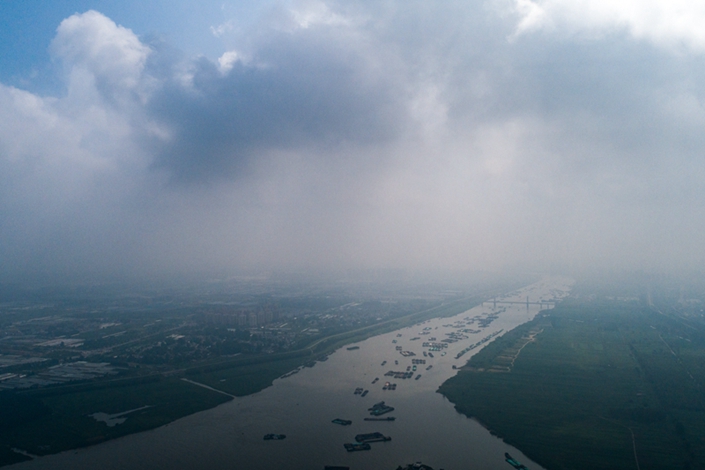 Some 800 boats, many loaded with sand, wait to pass a lock on the Bengbu section of the Huaihe River to further sail into the Shaying River, on Aug. 5. The congestion is caused by limited capacity at the facility and an official crackdown on sand excavation in Henan and Anhui provinces, which the river flows through. Photo: Chen Liang/Caixin

For centuries, the Shaying River was an essential shipping route connecting central and southern China.

It originated at the famed Songshan Mountain in Henan province, flowing 600 kilometers (372 miles) southeast before disappearing into the Huaihe River in Anhui province. It was one of the four key rivers flowing through Kaifeng when the Henan city was the capital of the Northern Song Dynasty (960 to 1127 AD).

By the 1950s, some 20,000 people worked on boats or wharfs in Zhoukou, another city that the river meets, according to government documents. But in the 1970s, it dried up after the excessive development of dams.

In 2005, a World Bank-backed program attempted to rejuvenate the Shaying, aiming to harness its shipping capacity and minimize pollution from road transportation, which has long plagued the area.

But the rebirth was never fully realized — due to water pollution, red tape, and sluggish economic growth, particularly in the once-hot property market.

But many local merchants have tried to take part in the river’s economic promise.

Yang Zhongyuan, a grain dealer in Zhoukou since 1985, switched from motor vehicles to boats for transport in 2008. The switch helped him cut operational costs by about 80% compared to road transportation, he said.

He is now the biggest dealer in the city — shipping out two million metric tons of grain via a number of wharfs along the Shaying River, he told Caixin in a recent interview.

Duan Qiliang’s ancestors were in the shipping business along the Shaying for decades before the river dried up in 1975. Duan restarted the family business in 2004 after finding little success in welding and machinery.

Duan said he did particularly brisk business from 2004 to 2008, owing much to a brief real estate boom. He raked in 60,000 yuan ($8,800) during one two-month stretch, a staggering amount for a small boat owner. “We’re so busy that we could hardly stay at a wharf for a day before needing to set sail for another voyage,” he said.

Last month, the local authorities tasked Duan with piloting a trial navigation route further upstream along Shaying River, which evoked fanfare because few had seen a cargo vessel in that section of the river for more than four decades.

But Duan said they had to stop occasionally to clear away aquatic weed through the 83 kilometer route to ensure the boat’s propeller functioned properly.

Like most small boat owners, Duan is still heavily indebted because he borrowed money for his vessel and incurred huge costs from tolls and fines imposed by authorities in charge of regulating shipping operations in different sections of the river.

Boat owners pay 70 different tolls and administrative fees, which can account for more than one-third of their costs, and they often face fines for no apparent reason, he said.