Xi Doubles Up on Africa with New $60 Billion Pledge 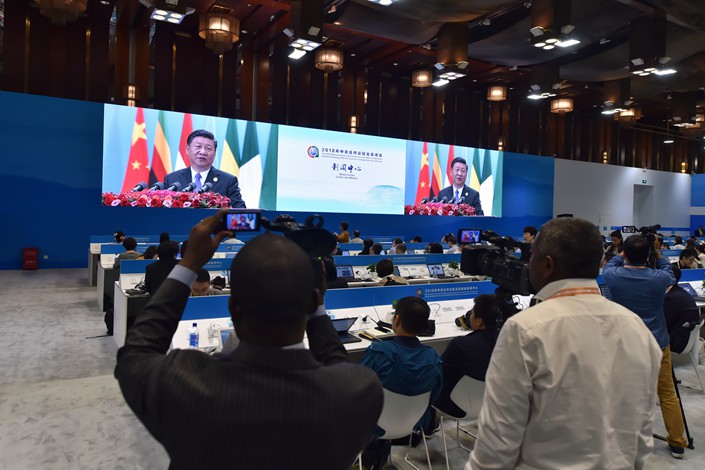 Reporters from China and around the world gather in the press center of the Forum on China-Africa Cooperation summit in Beijing on Sept 3. to watch Chinese President Xi Jinping deliver a keynote speech. Photo: IC

China’s investment in Africa is not intended to interfere with local politics, Chinese President Xi Jinping said at a Monday summit attended by leaders from the continent, where he pledged to provide $60 billion in new loans and aid to assist African countries’ development.

“China’s investment in Africa does not come with any political conditions attached, and will neither interfere in internal politics, nor make demands that people feel are difficult to fulfill,” Xi said.

He also stressed that the money invested will be used for practical ends such as infrastructure, the lack of which has been impeding African countries’ development.

Xi made the remarks at the two-day Forum for China-Africa Cooperation (FOCAC) summit in Beijing, amid questions raised by Western countries over the increasing debt pressure placed on African countries by Chinese loans.

Xi pledged $60 billion in aid and loans at the previous FOCAC summit three years ago in Johannesburg, to support 10 cooperation projects on the continent, in areas including industry, agriculture, infrastructure and trade. Xi said on Monday that these loans have either already been fulfilled, or been arranged for, and that China intends to provide another $60 billion in similar areas.

Government leaders and business representatives from 54 African countries are gathering in Beijing on Monday and Tuesday to discuss cooperation. The forum, established in 2000, holds a summit every three years.

In Monday’s speech, Xi emphasized Africa’s important role in the Belt and Road Initiative, a program advocated by Xi to promote trade and investment on land and sea routes extending from China to Europe and Africa. He sought to reassure the world about China’s motivation for investing in Africa.

China will also help African countries to increase their exports, as China is not simply seeking a trade surplus with these countries, Xi said.

China has been Africa’s biggest trade partner for the past nine years. The trade volume between China and Africa reached $170 billion in 2017, up 14% from the previous year.

Criticisms of China’s motives in Africa have emerged in recent months, with some arguing that African countries will struggle to repay their debts and fall deeper into “debt traps.”