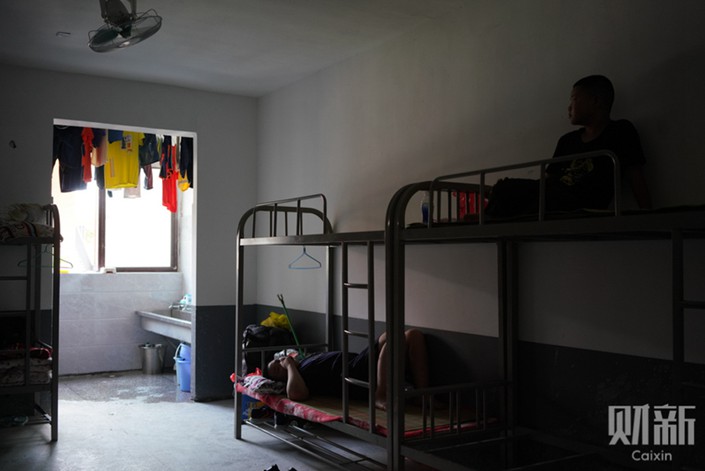 Students break for lunch in their dormitory room at a high school affiliated with Hunan Normal University in the city of Leiyang on the first day of the semester on Monday. Photo: Liang Yingfei/Caixin

Hundreds of parents gathered Saturday in front of local schools and government buildings in the city of Leiyang in Central China’s Hunan province to protest the city’s order to relocate some students from public schools to a private boarding school.

The protests turned violent, leading to dozens of arrests. Some protestors threw water and beer bottles, bricks and firecrackers at police officers and local officials, and more than 30 police were wounded in the clash, police said (link in Chinese).

Parents complained of sharply higher school fees and protested that unsafe levels of formaldehyde had been detected in the private school’s classrooms and dormitories after incomplete renovations. Pictures and videos posted on social media showed protestors holding banners saying things like: “No private schools and give me back nine-year compulsory education” and “We will not live in toxic dormitories, and we will not enter toxic classrooms.”

Leiyang is one of many cities in China that are trying to address the problem of oversized classes. The incident was triggered by a provincial order to cut class sizes at public schools to a maximum of 66 in 2018 by relocating some fifth- and sixth-graders to a private campus. Years of rapid urbanization have resulted in a disparity in how educational resources are allocated. Students flock to schools in cities, causing the schools to expand class sizes. Overcrowded classes raise the risks of declining quality of education and pose safety concerns.

In Leiyang, oversized classes with more than 56 students accounted for 40% of the classes in the city’s public school system, according to a government document.

The city’s education department said in an open letter to parents that the plan to transfer children to the private school is “the fastest and most effective way to eliminate oversized classes in the short term,” which is urgently needed.

Leiyang has been known for centuries in China as “Paper City,” the hometown of Cai Lun, the inventor of papermaking technology. In modern times it built a reputation as a major coal producer. Its urban population more than tripled to 580,000 in 2017 from 170,300 in 2002.

Parents said they were angered at the decision partly because the private school would charge extra fees even though the Leiyang government promised in June that there would be no higher fees for those transferred to the new campus, a branch of a middle school affiliated with Hunan Normal University.

But a parent told Caixin that the private school actually charged more than 10 times as much as the public schools.

According to a list of fees Caixin obtained from some parents, the students have to pay about 2,800 yuan ($410) each semester for room and board, books, linens and uniform fees. Several parents told Caixin that they had to pay no more than 200 yuan for each semester in public school.

A parent with the surname Wang told Caixin that parents got notice before the school orientation day Aug. 28 stating that all they needed to pay was 1,500 yuan for room and board. Only later did they learn that the actual fees total about 2,800 yuan.

As Saturday’s protest turned violent, 46 people were arrested by police. But police said only one of those is a parent and the rest are social idlers, including one suspected thief and six persons with criminal backgrounds.

In a statement on its official social media account, Leiyang police said it detained the people for disturbing public order and damaging police facilities during a protest outside a police station.

The private school at the center of the turmoil was built in 2014 by local developer Hunan Lufang Industry Group. In return for the company’s 7 million yuan investment in the school, the company also obtained commercial land and subsidies from the government. Questions have been raised that there might have been hidden benefits in the deal.

Leiyang also made news in June when it acknowledged that it didn’t have enough money to pay the salaries of civil servants, including public school teachers, because of a shortage of funds in government coffers. Leiyang government said it has failed to collect as much annual revenue as projected since 2012 because of the continued decline of coal-related industries.