Chart of The Day: Factory Activity in Guangdong Shrinks for First Time in Two Years 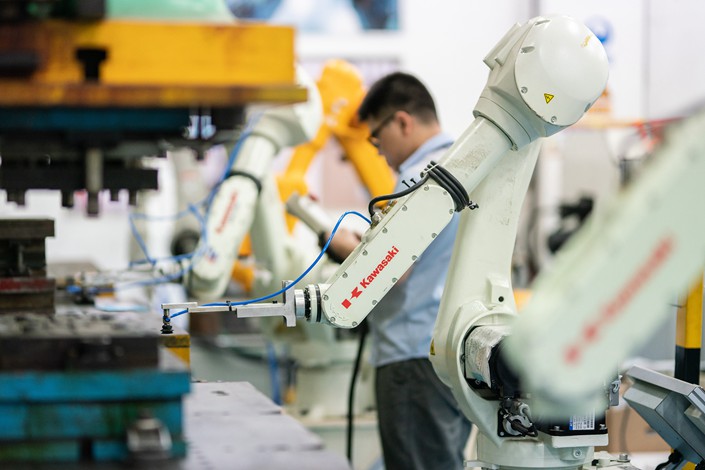 *Guangdong’s manufacturing purchasing managers’ index dropped to 49.3 in August, below the 50-mark that separates expansion from contraction

*An analyst said this contraction in activity is due to industrial restructuring and the ongoing Sino-U.S. trade war

Manufacturing activity in China’s industrial powerhouse of Guangdong contracted in August for the first time in 30 months, a sign that the Sino-U.S. trade dispute is taking a toll on the world’s second-largest economy.

The southern region’s manufacturing purchasing managers’ index (PMI) dropped to 49.3 in August from 50.2 in July, according to a statement (link in Chinese) released by the Economic and Information Commission of Guangdong Province. This is the first time since February 2016 that the index has fallen below the 50-mark that separates expansion from contraction.

Guangdong boasts the largest provincial economy in China. It is home to technology giants such as Tencent Holdings Ltd. and Huawei Technologies Co. Ltd., and many small manufacturing firms.

The province’s exports and imports accounted for nearly a quarter of the country’s total in the first half of the year, official data showed. About 12% of Guangdong’s two-way trade was done with the U.S. in the first six months of the year, down from 17.4% in the full year of 2017.

The headline PMI number is the weighted average of five key activity indicators: production, new orders, supplier delivery times, raw material inventories and employment. Four of the sub-indexes declined last month from July, with new orders falling by the largest margin of 1.7 points to 48.7, its first contraction in 30 months. As new business decreased and production slowed, raw material inventories ended a three-month stretch of contraction to return to expansionary territory last month, according to the commission’s statement.

This round of cooling in Guangdong’s manufacturing activity, which began in May, is partly related to industrial restructuring within the country, Chen Hongyu, an economics professor at the Party School of the Guangdong Provincial Committee of the Communist Party of China, said in the statement.


“It was also due to the negative effects of changes in international economic and political factors,” he said, likely referring to the escalating trade spat between China and the United States.

The U.S. slapped 25% tariffs on $34 billion of Chinese imports on July 6 and another $16 billion on Aug. 23 to punish China for alleged unfair trade policies and technology theft. Washington is also planning tariffs on another $200 billion worth of Chinese goods from selfie sticks to semiconductors.

China has responded with tit-for-tat levies on American products and has vowed to fight back should the U.S. introduce further tariffs.

The country’s economic growth decelerated to 6.7% year-on-year in the second quarter, a reading that has not been this low since the third quarter of 2016, according to the National Bureau of Statistics. The slowdown was mainly driven by weakening infrastructure investment. But trade tensions with the U.S. are threatening to cloud the economic outlook even further.