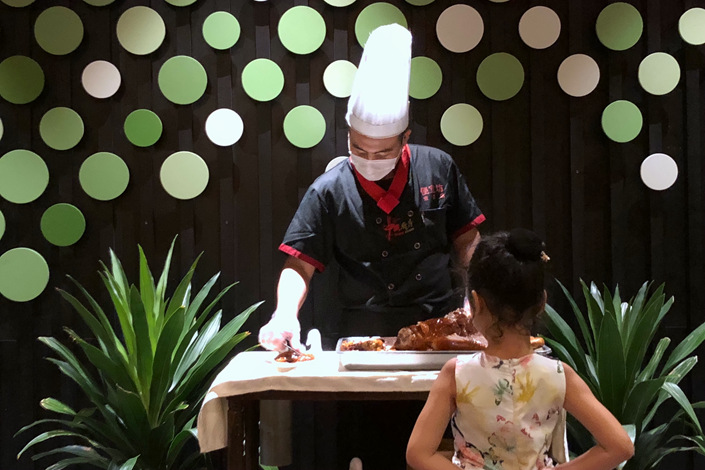 A chef carves a roast Peking duck at a restaurant in Beijing on Aug. 11. Photo: Wu Gang/Caixin

A gauge of activity in China’s services industries fell for the second consecutive month in August, adding to evidence that growth in the world’s second-largest economy is losing momentum, a Caixin survey showed Wednesday.

The Caixin China General Services Business Activity Index, which provides a snapshot of operating conditions in the country’s vast services sector, fell to 51.5, the lowest in 10 months, from 52.8 in July. A reading above 50 indicates expansion, while anything below signals a contraction. The further above 50, the faster the expansion; the further below 50, the greater the contraction.

The Caixin Manufacturing Purchasing Managers’ Index (PMI), which provides a picture of activity in the manufacturing sector, fell for the third straight month to its weakest level since June 2017, according to a report released on Monday. The Caixin China Composite Output Index, which covers both manufacturing and services, fell to a five-month low of 52.0 in August from 52.3 in July, Wednesday’s report showed.

The surveys indicate that “economic growth remains on a downward trajectory,” Zhong Zhengsheng, director of macroeconomic analysis with consultancy CEBM Group, a subsidiary of Caixin Insight Group, said in a statement. The readings “indicate that the effects of expansionary credit policy and active fiscal policy are yet to kick in. Signs of stagnation emerged as upward pressure on prices remained, even though demand weakened at a faster rate.”

The services sector, also known as the tertiary sector, includes finance, real estate services, marketing, transportation and retailing. It now accounts for more than half of China’s gross domestic product, according to government data.

The survey of services companies showed that while the gauge of new business showed a slight recovery from a 31-month low in July, the reading was still the second-weakest over the period, a level Zhong said suggested “demand for services remained sluggish.”

There were other signs of improvement — the index of business expectations, which indicates companies’ confidence in the business outlook over the coming year, rebounded from a 33-month low in July, while a gauge of employment showed a slight recovery.

The survey showed inflationary pressures continued to build, with the index of input prices, or operating expenses, at its highest in six months, and many companies reporting higher fuel and raw material prices, as well as greater staffing costs. Respondents were managing to pass on some price increases to customers.