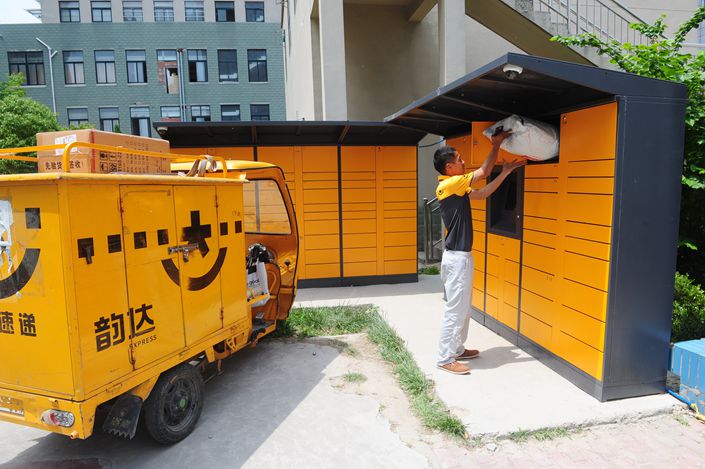 An express courier delivers a package on May 2 in Fuyang, Anhui province. Photo: VCG

The Caixin China General Services Business Activity Index, which tracks the services sector, rose from 52.9 in May to 53.9 in June, the fastest pace in four months. A number above 50 indicates an expansion, while anything below signals a contraction.

“The employment and new business indexes both climbed moderately, pointing to a positive trend in both the supply and demand for services,” said Zhong Zhengsheng, director of macroeconomic analysis with consultancy CEBM Group, a subsidiary of Caixin Insight Group.

The services sector includes finance, real estate services, marketing, transportation and retail. Known as the tertiary sector, it accounted for more than half of China’s gross domestic product over the past three years, according to the National Bureau of Statistics.

New business placed with services providers rose faster in June, with respondents attributing the increase to new product offerings and improved marketing strategies, according to the Caixin survey.

Services providers hired additional employees at the quickest pace in 10 months in June, and backlogged orders continued to contract marginally for the second month in a row, the survey showed.

The subindex of input costs edged up to a four-month high, prompting companies to continue to raise the prices they charge customers, according to the survey.

Input costs rose more significantly than these prices, putting pressure on service providers’ confidence, Zhong said. The index of business expectations, a gauge of companies’ confidence in their business for the next 12 months, dipped in June from a recent high in May.

The Caixin China Composite Output Index, which covers both the manufacturing and services sectors, rose from 52.3 in May to 53.0 in June, the highest since February.

The Caixin China General Manufacturing Purchasing Managers’ Index (PMI), which tracks the country’s manufacturing sector, slipped to 51.0 in June from 51.1 in May.

China’s official nonmanufacturing PMI, which covers services and construction, rose to 55.0 in June from May’s 54.9.