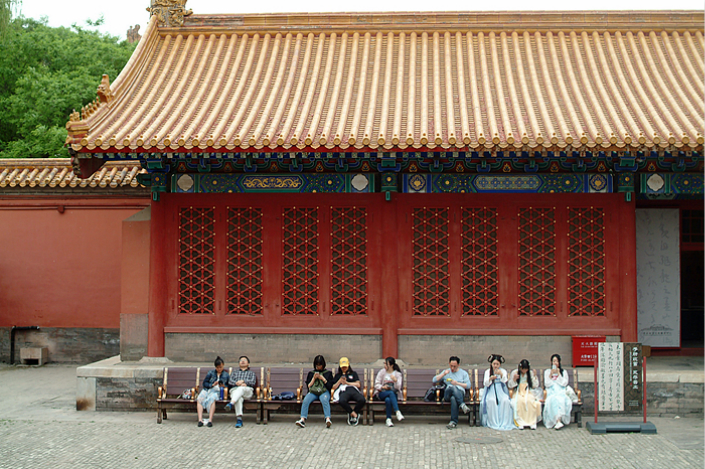 Tourists, including some who dressed up in traditional Chinese costumes, take a break beside an art exhibition hall in the Forbidden City in Beijing on May 5. Photo: Wu Gang/Caixin

Growth in China’s services activity remained stable in May, with prices charged rising at the slowest pace since September due to fierce competition, a Caixin survey showed Tuesday.

The Caixin China General Services Business Activity Index, which tracks the services sector, stood at 52.9 in May, unchanged from April. A number above 50 indicates an expansion, while anything below signals a contraction.

New business placed with services providers increased in May, according to the survey. Respondents said that firm client demand and new product offerings helped boost sales, while some providers added employees to clear backlogs of work.

The rate of job creation in the services sector was the quickest in four months. Backlogs of work declined in May after rising in the prior two months, the survey showed.

The rate of growth in input costs picked up slightly in May, forcing companies to again raise their prices. “However, competitive pressures reportedly restricted the overall pricing power of service providers, with their charges increasing at the slowest rate for eight months,” according to international data analytics firm IHS Markit Ltd., the index’s compiler.

Overall, the index of business expectations, a gauge of services providers’ confidence for the next 12 months, reached its highest since June 2017, said Zhong Zhengsheng, director of macroeconomic analysis at consultancy CEBM Group, a subsidiary of Caixin Insight Group.

The services sector includes finance, real estate services, marketing, transportation and retail. Also known as the tertiary sector, it accounted for more than half of China’s gross domestic product over the past three years, according to the National Bureau of Statistics (NBS).

The Caixin China Composite Output Index, which covers both the manufacturing and services sectors, stayed unchanged in May from April's reading of 52.3, signaling a steady expansion.

The official nonmanufacturing PMI, which covers services and construction industries, rose for the third consecutive month in May to 54.9, according to the NBS.