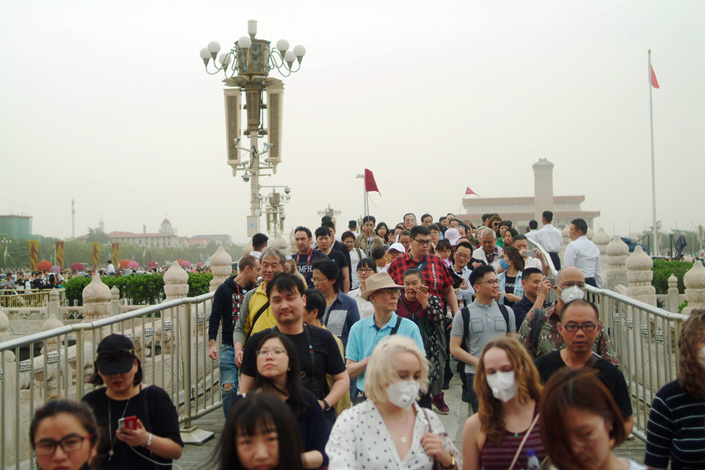 Tourists flock into the Forbidden City from Tiananmen Square in Beijing in May. Photo: Wu Gang/Caixin

Activity in China’s services industries expanded at a slower pace in July, and business optimism was at its weakest level in almost three years, a Caixin survey showed Friday.

The Caixin China General Services Business Activity Index, which tracks the services sector, fell to 52.8 from 53.9 in June, the lowest reading since March. A number above 50 indicates an expansion, while anything below signals a contraction.

This is “a clear sign that demand for services worsened,” said Zhong Zhengsheng, director of macroeconomic analysis with consultancy CEBM Group, a subsidiary of Caixin Insight Group.

Services companies continued to add to their payroll numbers, but the rate of job creation softened in July, the survey showed. Higher staffing levels and greater efforts to clear order backlogs led to a further decline in outstanding business.

Services providers reported a strong rise in operating expenses that was generally linked to higher fuel and raw material prices, alongside greater salary costs. But they raised the prices they charge customers, although at a slower pace than in June.

The services sector includes finance, real estate services, marketing, transportation and retailing. Also known as the tertiary sector, it accounted for more than half of China’s gross domestic product over the past three years, according to government data.

The Caixin China Composite Output Index, which covers both the manufacturing and services sectors, dropped to 52.3 in July from 53.0 the previous month, taking it back to the level it was in May.

The Caixin China General Manufacturing Purchasing Managers’ Index (PMI), which tracks the manufacturing sector, slipped to 50.8 in July from June’s 51.0.

China’s official nonmanufacturing PMI, which covers services and construction, fell to 54 in July from 55 the previous month.