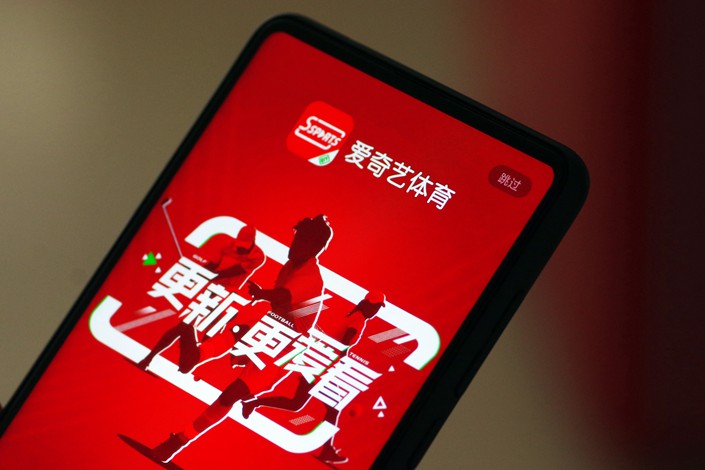 The cellphone app iQiyi Sports is seen on a smartphone on Aug. 8. Photo: IC

A joint venture between video streaming platform iQiyi Inc. and a sports broadcaster has secured a total of 850 million yuan ($124.3 million) in funding in the month following its establishment.

The funding followed an initial tranche of 500 million yuan completed last month. The two tranches will give the company a valuation of about 3.4 billion yuan, according to Beijing Xin’ai CEO Yu Lingxiao.

Beijing Xin’ai was formed in late July by iQiyi — which is backed by search engine Baidu Inc. — and Super Sports Media, a broadcaster known for livestreaming popular sports events such as the English Premier League.

Beijing Xin’ai operates a branded platform formed out of the integration of the two companies’ sports-related businesses — iQiyi Sports.

“Our partnership with Super Sports Media in this exciting new joint venture is the ideal combination of both companies’ strengths, stimulating growth across the industry,” said iQiyi founder and CEO Gong Yu.

“IQiyi is committed to supporting the growth of iQiyi Sports and will continue to contribute our wealth of existing IP (intellectual property) and resources to ensure our users receive a level of sports entertainment experience unmatched by any other platform,” he added.

IQiyi, which went public in the U.S. earlier this year, is one of China’s major online video platforms with 67.1 million subscribers, which it said included 66.2 million paid members by the end of June.

The deal comes at a time when the country’s major online entertainment platforms are scrambling to ramp up investment in sports to meet the increasing appetite for sports among Chinese internet users.

By partnering with Super Sports Media, a subsidiary of entertainment company Wuhan DDMC Culture Co. Ltd., iQiyi has accessed the latter’s rights to air some of most popular international sports events — such as the Australian Open, the UEFA Nations League and the ATP Tour — to its users.

Alibaba Group Holding Ltd. is another major player in the area, with its Youku Tudou securing the rights to air the top flight of Chinese soccer earlier this year, after making a deal with Suning.