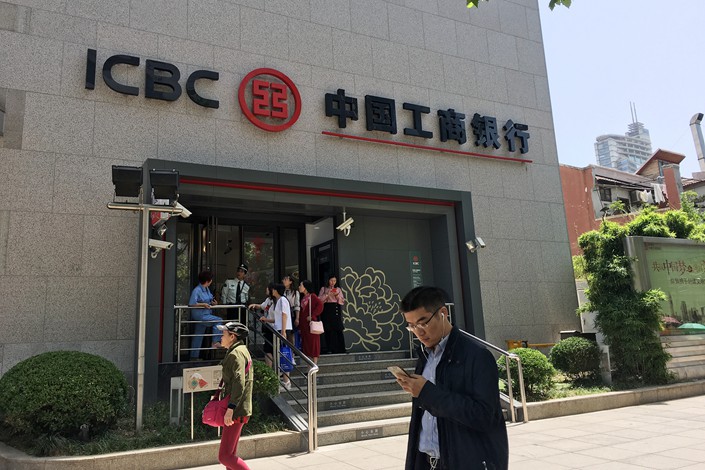 * Branch used money it raised from Ping An, Zheshang and Citic banks to fund investments that it wasn’t supposed to make

(Beijing) — Zhang Hui wanted to make it big when he took over the operations of the Industrial and Commercial Bank of China (ICBC) in the city of Xiangyang, Hubei province, in late 2012.

The third-tier Chinese city, the second-largest in the province, was seen as being on a quick path of urbanization. Like many people at the time, Zhang, then 43, surmised that there was money to be made in real estate — if only one could get around the regulations that capped how much banks could lend to them.

Under Zhang, ICBC’s Xiangyang branch would go on to illegally raise 13.2 billion yuan ($1.93 billion) by selling unregistered investment products to other banks from 2014 to 2016. Through a complicated series of transactions, the bank then funneled the money to real estate developers that were hard-up for financing while earning itself fat profits, which Zhang used to bolster the branch’s balance sheet and inflate his own reputation. In the end, however, the scheme left ICBC on the hook for 3.1 billion yuan that it has yet to repay, according to ICBC bankers and staff members at the bank’s Xiangyang branch.

ICBC has not responded to Caixin’s requests for comment on the matter.

Zhang’s off-balance-sheet adventure offers a glimpse into the world of “shadow banking” before the government began its crackdown on off-balance sheet shenanigans two years ago. At that time, there was a lot of money to be made for banks — and accolades for executives — willing to violate rules designed to protect their business, their depositors and China’s financial system as a whole.

When ICBC’s Xiangyang branch began raising money in 2014, the bank had internal caps in place restricting how much money branches could lend to developers of real estate projects in third- and fourth-tier cities. Those rules were part of the bank’s internal risk controls. They also dovetailed with government regulations designed to curtail off-balance-sheet lending.

Loosely regulated and opaque lending outside the formal banking system, known as shadow banking, nearly tripled over the past decade to 260 trillion yuan, according to the China Banking and Insurance Regulatory Commission. Such activities had once been tacitly approved by the regulators because they provided an additional funding channel to help smaller private enterprises obtain credit, albeit at a high rate of interest. However, due to the enormous amount of such lending that has taken place, regulators have become worried about growing leverage and liquidity risks to China’s financial system.

To circumvent these rules, the branch in Xiangyang — which oversees all ICBC banks in the city — began to raise money by selling unregistered wealth management products (WMPs) on the interbank market, Caixin has learned from a staff member at the branch.

According to one ICBC banker, the WMPs, which typically matured in one to two years, paid an annual interest rate of 6% to 7%.

The branch then entrusted the raised funds to a third party, usually an asset management firm, which — in exchange for a fee — invested the money in real estate projects and other investments. When all was said and done, the money raised through the unregistered WMPs got invested in 24 companies, most of which were local property developers and investment firms.

These investments generated returns far higher than what the branch had to pay to its WMP investors. The branch pocketed the difference, earning itself a tidy off-the-books profit.

Neither the regulators nor the higher-ups at ICBC headquarters detected what Zhang was doing at the Xiangyang branch, even as the money flowing in helped him boost his standing among other branch managers.

In November 2015, three years after Zhang took over ICBC’s banking operations in Xiangyang, he bragged about his performance in an interview with ICBC’s internal journal. He pointed out that that branch’s rankings in some key bank performance measures had increased since he took the helm. By September 2017, its new yuan savings, for example, jumped from 62nd to fourth among ICBC’s secondary branches nationwide. And it topped other secondary branches in terms of revenues and profits in the province.

In the interview, Zhang likened the expansion of bank’s customer base to “a war we cannot afford to lose,” requiring his staff to “battle” for each opportunity to sell more of the bank’s products.

Zhang holds a doctorate in economics, and spent some time lecturing at Zhongnan University of Economics and Law as an assistant professor, according to public information. Before taking over the Xiangyang branch, he worked in a variety of positions around the province and at ICBC’s regional headquarters in Wuhan.

Under Zhang, the branch was using the money it raised from Ping An, Zheshang and Citic banks to fund investments that it wasn’t supposed to make. It used at least some of the profits to pretty up its balance sheet. However, it remains unclear exactly how the bank managed to get the under-the-table profits back on its books.

It also remains unclear why the staff at Ping An, Zheshang and Citic banks failed to sound the alarm about WMPs that didn’t appear to exist. “Investors can check the authenticity of any of the WMPs that ICBC sells on its website,” a banker with ICBC told Caixin. “But there would have been no way to track these fake WMPs online.”

The banker found it hard to believe the other banks would have missed this. “The three banking counterparties and related financial institutions ought to have known those WMPs were fake. But they didn’t bother as long as the products carried ICBC’s corporate stamp and guaranteed the principal and interest.”

ICBC discovered the unregistered WMP contracts during an internal audit in September 2016. The following January, ICBC’s branch for Hubei province ordered the Xiangyang branch, which it oversees, to seriously deal with 12 employees involved in the contracts, though it was unclear if Zhang was among them. The province branch also promised to continue to investigate the matter.

China’s banking regulator found out about the contracts later that year during an on-site inspection of the bank. In December 2017, the regulator’s Hubei bureau fined the Xiangyang branch 350,000 yuan for violating the rules on the issuance of interbank WMPs. Three month later, in March, Zhang was asked to take responsibility for the shady fundraising.

At the end, Zhang appeared to have difficulty accepting that he had done anything wrong. “Zhang was very confident and daring, but he didn’t know enough about compliance,” said an ICBC staff member who had worked with Zhang. “When the off-balance sheet operations were discovered, he refused to admit to the violations and kept defending the practice as a profitable business for ICBC. He said it was just to create a financing channel for local real estate companies.”

As punishment, the province’s banking regulator barred him from serving as a senior banking executive for three years. Zhang was demoted to a position in the credit and investment management department of ICBC’s branch in Wuhan, the capital of Hubei province. He is now in charge of liquidating the WMPs he once sold to repay the banks that bought them.

As of early July, ICBC’s Xiangyang branch has managed to repay about 10.1 billion yuan of the 13.2 billion yuan it had raised. Of the remainder, 937 million yuan worth of products have matured without being repaid.

ICBC’s Xiangyang branch now has a 3.1 billion yuan hole in its balance sheet and owes a lot of money to Ping An Bank, which is the one investor it hasn’t completely paid back, said an ICBC banker, who pointed out that Ping An Bank could sue ICBC to get its money back.

Wu Hongyuran and Peng Qinqin contributed to this report.