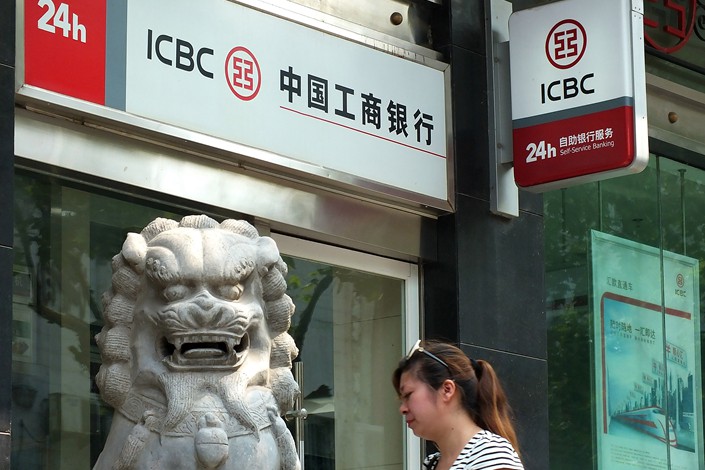 A branch of the Industrial and Commercial Bank of China is seen in Yichang, Hubei province, in July 2014. Photo: VCG

* The case underlines “six years of sloppy management at the Shiyan branch and a lack of oversight by the bank’s managers at the provincial level,” according to an internal ICBC document

(Beijing) — Two branches of China’s largest bank are under investigation in Hubei province for illegal fundraising and loan fraud, with each of the cases involving hundreds of millions of yuan, people familiar with the matter said.

The investigations, which all involve bankers sidestepping regulatory lending caps, raise questions about the risk-management practices of Industrial and Commercial Bank of China (ICBC) at a time when regulators were turning a blind eye to “shadow banking.” The colossal growth in these loosely regulated and opaque activities outside the formal banking system has left regulators worried about growing leverage and liquidity risks to China’s financial system.

The new cases in particular show that the scope of such misconduct at ICBC, the world’s largest bank by assets, went well beyond a single city branch in Central China’s Hubei province. Caixin reported earlier that ICBC’s branch in Xiangyang, the province’s second-largest city, illegally raised 13.2 billion yuan ($1.92 billion) from 2014 to 2016 by selling unregistered investment products to other banks. Through a series of camouflaged transactions, the branch then funneled the funds to real estate developers and other borrower who were hard-up for financing. The branch’s goal was to earn a fat profit from the off-balance-sheet scheme, but it ended up leaving ICBC on the hook for 3.1 billion yuan.

ICBC headquarters and China’s banking regulator began investigating violations in Hubei several months ago after they became aware of a growing number of missed payments on the ballooning assets of branches in the province.

The recently released results of an investigation determined that another ICBC branch in Hubei, in the city of Jingmen, about three hours away from the capital of Wuhan, employed a similar scheme to illegally raise money to fund investments that it wasn’t supposed to make.

From 2014 to 2015, the Jingmen branch illegally raised 700 million yuan by selling unregistered investment products to the Dalian branch of China Citic Bank and to the Shenzhen branch of Industrial Bank of China. It then channeled the money to three local firms, including two trade companies and a property developer, through high-interest entrusted loans, a regulatory official familiar with the case told Caixin.

Although the 700 million yuan has been repaid to the other banks, the banking regulator plans to seriously deal with the violations once the investigation is complete. “The fraudulent practices at the Xiangyang and Jingmen branches were spotted at roughly the same time. The heads of the two branches are now under supervision and awaiting punishment,” the official said.

The investigation also unearthed a case of fraud at another ICBC branch in Hubei that resulted from bankers sidestepping lending caps. Regulators detected the problem at ICBC’s branch in Shiyan, a remote city in the northeastern part of the province. Investigators found that the branch had approved credit lines for local trade company Shiyan Aoming Industrial & Trade Co. Ltd. and 15 other companies that claimed to be its suppliers.

Through the line of credit, the company and its suppliers borrowed a combined 605 million yuan from ICBC through trade finance, unsecured cash loans and fixed-asset loans issued by four of the bank’s Shiyan sub-branches. Regulators later found that the sum of loans issued violated the regulatory caps on how much banks are allowed to lend to the main company in a supply chain. They also found that the branch made the loans before completing thorough due diligence on Aoming Industrial & Trade’s suppliers.

By May 2017, payments were overdue on all 605 million yuan of the loans, saddling the branch with an immense nonperforming loan, according to people who worked in the Shiyan branch.

To dispose of the bad debt, the Shiyan branch sold the 605 million yuan in loans to China Great Wall Asset Management Co. Ltd., one of the country’s big-four asset managers, for a discounted price of 186 million yuan, Caixin has learned. Ultimately, the loans to Aoming Industrial & Trade and its suppliers cost the ICBC branch 419 million yuan.

According to an internal ICBC document seen by Caixin, the case underlines “six years of sloppy management at the Shiyan branch and a lack of oversight by the bank’s managers at the provincial level.”

Regulators have also taken measures to hold the bank accountable. In April, the China Banking and Insurance Regulatory Commission fined ICBC’s Shiyan branch 250,000 yuan for its poor due diligence on the loans to Aoming Industrial & Trade, according to a statement released on the website of the banking regulator’s bureau in Shiyan. It also fined three of Shiyan branch’s managers 2,000 yuan to 4,000 yuan each.

Several ICBC staff members, however, have questioned whether the penalties were severe enough to stop similar violations from happening in the future.