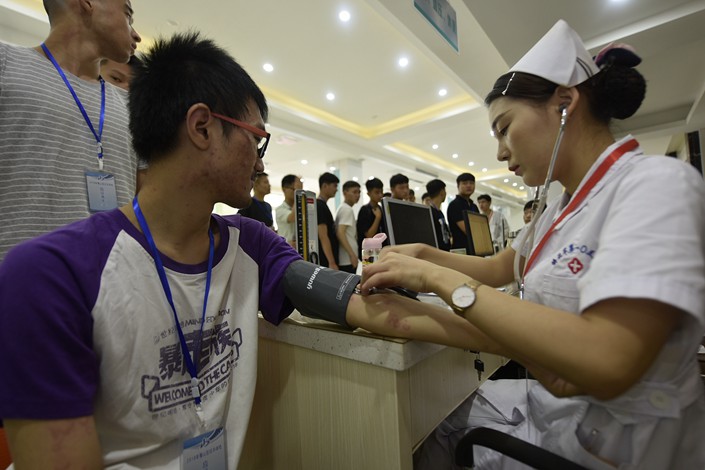 IKang said it was informed about the change by the consortium, which said it is “re-evaluating the commercial viability” of the deal that was inked in March to take over the company for $20.60 per American depositary share (ADS).

The information, released over the weekend, sent iKang shares down more than 10% to $16.25 on Monday, 21% lower than the price offered by the consortium.

The consortium includes both Alibaba and Yunfeng Capital, backed by Alibaba founder and Executive Chairman Jack Ma, who will go through a career shift in the year ahead after announcing Monday that he will quit as chairman next year and possibly return to teaching.

The consortium has requested a one-month extension of the deal termination date to the end of October. If it collapses, iKang might have trouble securing a new purchaser to repay a loan of 850 million yuan ($123.9 million) that is due in December. The company admitted that it currently doesn’t have sufficient cash to cover the loan.

IKang is one of China’s largest private clinic networks, offering medical checkups at 115 medical centers in 33 cities as of Friday. Its coverage extends to more than 200 cities through agreements with third-party facilities.

Yunfeng placed a bid in June 2016 for iKang at $20 to $25 per ADS in an all-cash transaction. Both Zhang and the Meinian consortium withdrew their bids days after the Yunfeng offer, leaving it as the only suitor. However, China Life Insurance Co. Ltd. unexpectedly emerged as a fourth bidder, offering a price that was “slightly higher than $20 per ADS,” a source close to China Life told Caixin at the time.

Progress on the deal stalled, only to be resumed by Alibaba in March this year. Although the companies entered into a definitive agreement, the buyer is not obligated to complete the deal because one of the conditions hasn’t been achieved.