Italy Wants to Be China’s Gateway to Europe, Partner in Africa

By Xie Wenwen and Fran Wang 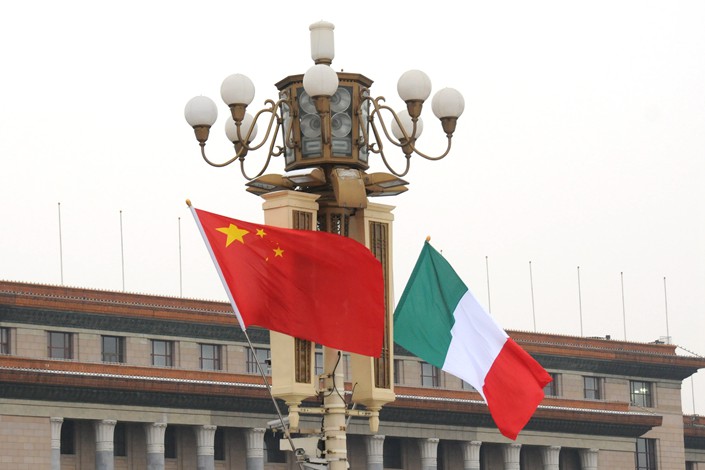 Michele Geraci, Italy’s undersecretary of state for economic development, said Italy wants “to be the leader in Europe in the relationship with China.” Photo: VCG

Italy aims to be China’s leading economic and trade partner in Europe and is open to becoming a Mediterranean transport hub for Beijing’s Belt and Road Initiative, the country’s undersecretary of state for economic development said in an interview with Caixin.

“We are exploring the possibility of having closer cooperation and for Italy to be the leader in Europe in the relationship with China,” Michele Geraci told Caixin. He spoke during a 10-day visit to China from late August to early September.

Geraci was heading the first official mission of the new Italian coalition government’s Task Force China, a program unveiled late last month with a goal to enhance relations in the fields of trade, finance, investment, research and development, and co-operation in third countries. The team is also seeking to “guarantee Italy a position of leadership in Europe vis-à-vis China’s Belt and Road and Made in China 2025 initiatives,” the Ministry of Economic Development said in a statement issued at its launch.

“The message is: The new government is looking at China more with interest and with the positive view of building stronger cooperation, win-win for both. That in the past was not done very well,” said Geraci, an economist who previously taught at the University of Nottingham Ningbo China and at Zhejiang University.

During the trip, the delegation met with officials from the Ministry of Commerce; the National Development and Reform Commission, China’s top economic-planning agency; the Silk Road Fund, which is tasked with investing in Belt and Road-related projects; sovereign wealth fund China Investment Corp.; and executives of state-owned banks, enterprises and private firms that included technology giants Tencent Holdings Ltd. and Huawei Technologies Co. Ltd., and automaker BYD Auto Co. Ltd.

Geraci, who lived in China for a decade from 2008, said Italy is interested in building itself into a transport hub in the Mediterranean Sea to connect Europe with countries along the route of the Belt and Road Initiative, a strategy proposed by Chinese President Xi Jinping in 2013 to strengthen ties with other nations, primarily through infrastructure constructions.

“China is looking for strategic partners along the Silk Road and the Belt and Road Initiative, and we want to discuss (it) with China,” he said. “Italy can be one terminal, maybe (in) Mediterranean Europe, … an endpoint or hub for the One Belt, One Road… (not only) for shipping, but also for rail and also for airlines.”

Italy is also welcoming investment from China, especially in infrastructure and environment-friendly sectors, such as the electric-car and battery-making industries, he said, promising that his government will give national treatment to Chinese firms.

Asked whether Italy shares suspicions about Chinese investment like other European countries such as France and Germany, Geraci said: “No, we don’t have these issues yet. I don’t think we will have it. … Italy is generally a very open economy.”

The two countries can also cooperate in developing Africa’s economy, he said, despite criticism that China’s approach to the continent lacks transparency and risks plunging countries into indebtedness.

“The most urgent thing is to stabilize the economy and the society in Africa because if this happens, then the migrant flood will decline,” he said. “We have no place in Europe for everyone.”