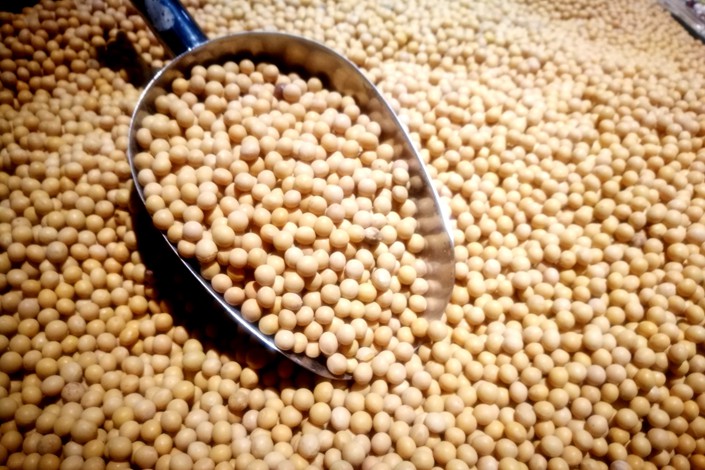 The oilseed has found itself on the front line of the trade dispute between the world's two largest economies as it is the U.S.'s most valuable export to China. Photo: IC

*The Agriculture Ministry cut its soybean import forecast for the 2018-19 period by 11% after U.S. producers were hit by a 25% import levy

*Another factor is increasing domestic production of the oilseed, with Chinese farmers estimated to produce 8.8% more during the period

(Beijing) — China, the world’s largest consumer of soybeans, slashed its forecast for imports of the oilseed for the 2018-19 crop year, reflecting the impact of an intensifying trade dispute with the U.S., its second-biggest supplier.

American soybean producers were hit with a 25% import levy on July 6 as part of the tit-for-tat tariff war between Beijing and Washington that started earlier this year, and this was cited by the ministry as one of the main reasons for the drop in its estimate.

The oilseed has found itself on the front line of the trade dispute between the world’s two largest economies. Beijing has targeted the commodity as it is the U.S.’ most valuable export to China and one of the few areas where the U.S. runs a trade surplus — China accounted for 60% of its total soybean exports in the 2016-17 crop year, according to the United States Department of Agriculture (USDA).

The trade war isn’t the only reason for the cut in China’s projection. The ministry also pointed to higher domestic output as farmers are encouraged to plant more of the oilseed to make up for a likely shortfall from the U.S., efforts to lower the content of soybeans in animal feed and falling profitability among pig farmers.

China is heavily dependent on imports to satisfy its demand for soybeans, which are used to make animal feed, cooking oil, and products such as tofu and soy sauce. Ministry of Agriculture data show that the country imports about 85% of its total demand. Its three biggest suppliers are Brazil, which accounted for 51% of imports in the 2015-16 crop year; the U.S., which comprised 35%; and Argentina, which supplied 10%, according to data from World Trade Atlas, a provider of global commodity trade data and analysis.

China’s position as the world’s largest soybean consumer has given it a significant influence on global prices. Since it announced plans to impose the tariffs on April 4, soybean futures traded on the Chicago Board of Trade have fallen by around 20%, according to Bloomberg data.

“Since the tariffs took effect, Chinese importers have avoided buying soybeans from America,” said Wang Qian, a soybean analyst at TF Futures Co. Ltd. “It’s seen as politically sensitive and also, after the additional tariffs are imposed, there’s little profit to be made.”

Chinese importers have mostly turned to Brazil, the world’s largest soybean exporter, to fill the shortfall in supply. The South American country sold 85% of its soybean exports to China in August, a 7-percentage-point increase from the previous month, according to the USDA. At that rate, Brazil’s exports of soybeans to China would reach nearly 60 million metric tons for the year ending January 2019 compared with 54.4 million the previous year, accounting for all of the additional soybeans Brazil harvested in 2018, the agency said in its monthly oilseeds report for September.

But as Brazil approaches the end of its season and Argentina’s crop has been devastated by drought, analysts say they will have little scope to boost shipments to China to counter a decline in U.S. exports resulting from the tariffs.

“To satisfy its demand, China might choose to import other protein feeds, such as rapeseed or flaxseed as a substitute for U.S. soybeans,” Wang said.

The Chinese government has been rolling out subsidies to encourage more soybean planting in the northeast provinces to reduce the country’s heavy reliance on imports. The Ministry of Agriculture has estimated that domestic soybean production will rise to 15.83 million metric tons in 2018-19, up 0.46 million metric tons from last month’s forecast and 8.8% more than the previous year.

Government measures to encourage the use of animal feed with less protein content have also contributed to a reduction in demand for soybeans, which is helping reduce China’s need for imports, the ministry said. A slump in profits among pig farmers, which analysts have attributed to the rising cost of feed, is also affecting consumption.