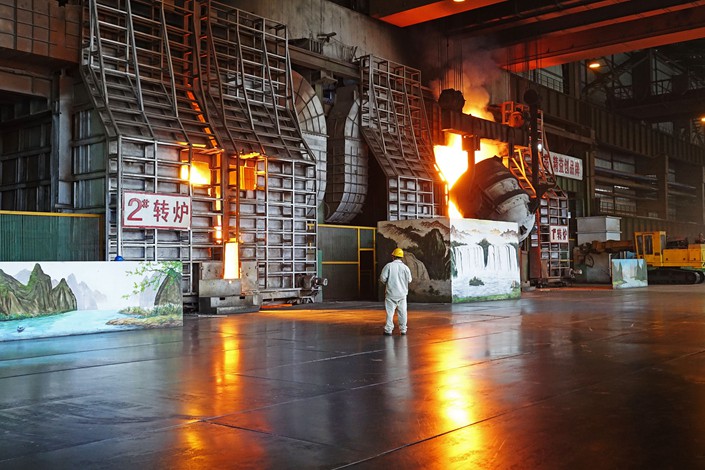 A steel worker keeps an eye on a converter at a plant in Hebei province on Aug. 1. Photo: VCG

Cities in north China’s Hebei province should abandon drastic acts like setting production limits for factories from heavily polluting sectors and take a more flexible approach to avoid major disruptions during the upcoming winter smog season, according to a new government proposal.

The proposal (link in Chinese) from the Hebei provincial environmental protection bureau expressly forbids the “single knife cut” approach that many local governments used in the province last year in a bid to curb the region’s infamously heavy smog. That one-size-fits-all effort saw factories in heavily polluting sectors like steel and cement production ordered to drastically reduce their production by specific amounts to clear the region’s air.

The actions had the desired result in cleaning up pollution, but caused big disruptions in production for affected industries. On a smaller scale, many local residents were also left in the cold after they were ordered to stop burning the coal they traditionally used to heat their homes, even though replacement systems powered by cleaner fuels like natural gas and electricity were not in place yet.

The new proposal would call on local governments to take a flexible approach in the upcoming smog season, rather than setting specific output reduction targets like those seen last winter. For example, many steelmakers at that time were ordered to cut output by 50%, while coking facilities were told to reduce their activity by about 30%.

The new proposal calls for specific polluting sectors to continue adjusting their output to reduce pollution, for example by coordinating production times among different factories. But it would forbid the use of specific reduction targets for individual factories or sectors. Companies that violated existing emissions and other environmental protection laws would continue to be punished and shut down as usual, and would not be affected by the new policy.

The proposal would also ban local governments from ordering reductions in the name of the central government and other central authorities.