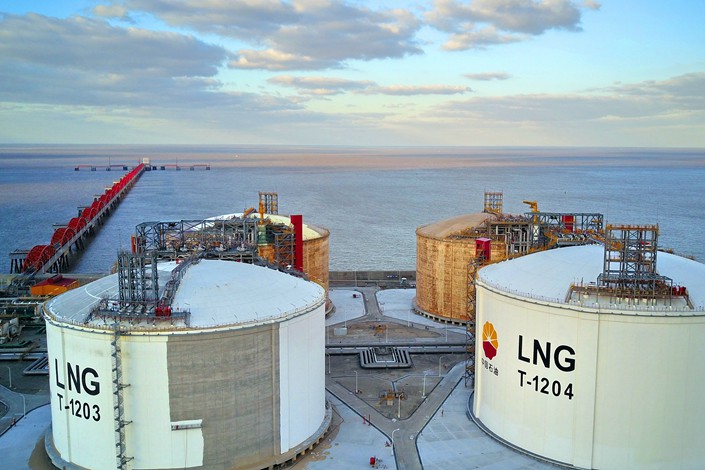 Even as China swelters under the summer sun, the country’s gas market is heating up in anticipation of winter, with the spot price of liquefied natural gas (LNG) soaring after Hebei announced a major drive to switch from coal to gas power for heating.

The LNG spot price – the price of purchasing the commodity the same day – usually surges in October and November as heating systems are turned on across northern China. But the rise is happening much earlier this year in anticipation of major changes in market demand, according to the Shanghai Petroleum and Natural Gas Exchange.

According gas industry sources, the rise in the LNG spot price is due to a general increase in consumption as well as increased demand for stocks in anticipation of the government continuing its push to replace coal with gas as the main fuel for winter heating. The switch to cleaner-burning gas is part of the campaign to reduce the heavy smog that chokes many northern cities and towns during the winter months.

This week, northern China’s Hebei province, home to 74 million people, released its plan to replace coal with gas and electricity for winter heating. In rural areas of the province, loose coal burned in winter is one of the main sources of air pollution. To combat this, the Hubei government aims to replace coal furnaces with gas heaters in 1,451,000 households and to connect another 319,000 households to the central power grid so they can use electric heaters.

The government anticipates that the project will cost 28.6 billion yuan ($4.2 billion) in total, some of which will subsidize households’ purchases of new gas heaters. But the plan will also improve gas infrastructure across the province, including building a major gas pipeline being built to carry fuel from Shaanxi province in the west. The plan also depends on the completion of work on gas-fired power plants, such as the ongoing effort to more than double the capacity of the plant in the Caofeidian industrial zone.

Hebei started its push to reduce coal consumption last winter, with 2.5 million households making the switch to gas. However, the switch was hampered by an underestimation of how much additional fuel the province would need and a failure to develop the supporting pipelines in time, forcing some coal-fired power plants to be restarted temporarily.