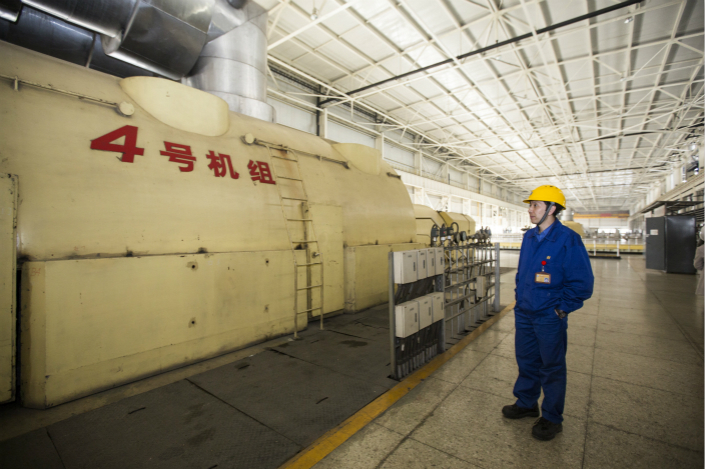 The order to burn coal comes amid other signs that efforts to reduce pollution by switching to “cleaner” natural gas are backfiring. In November, Hebei province announced a Grade 2 natural gas supply emergency, meaning that demand for gas exceeds supply by between 10% and 20%. Photo: Visual China

Beijing’s city government has ordered power companies to immediately fire up backup coal-burning generators in response to a natural gas shortage in North China during the critical winter heating period.

Under instructions from the National Development and Reform Commission, the city sent notices to the State Grid Corp. of China’s North China division, State Grid Beijing Electric Power Co. and Huaneng Beijing Thermal Power Co. Ltd. to begin emergency coal power generation to reduce the city’s use of natural gas, according to a document obtained by Caixin.

The order, issued on Thursday, comes amid other signs that China’s efforts to reduce pollution by switching from coal to “cleaner” natural gas energy are backfiring.

In late November, Hebei province announced a Grade 2 natural gas supply emergency, meaning that demand for gas in the province exceeds supply by between 10% and 20%.

On Dec. 4, the Ministry of Environmental Production announced that it would ease restrictions on coal heating in the Beijing-Tianjin-Hebei region, in light of natural gas shortages. Meanwhile, thousands in China’s coal belt have been secretly burning wood and coal at home to keep warm.

At the beginning of 2017, a group of government departments, including the Ministry of Environmental Protection and several northeastern provincial governments, issued a document declaring “no coal zones” in northern Chinese cities including Beijng, Tianjin, Langfang and Baoding.

But by the end of November, state-owned oil and gas company China National Petroleum Corp., realized that Hebei’s use of natural gas was exceeding expectations, putting pressure on neighboring areas’ gas supplies.

Beijing’s use of natural gas has climbed in recent years under its 2013-2017 clean air plan. In 2015, Beijing became the city with the third greatest natural gas consumption in the world, surpassed only by Moscow and New York.

Huaneng Beijing, one of the companies that received the city’s emergency coal burning order on Thursday, is the only major power supplier in the region that still has coal-fired generators on standby.

The city’s last major coal-fueled generator in regular use, belonging to Huaneng Beijing, was shut down on March 18, making Beijing the first Chinese city to be completely weaned off coal. But Huaneng Beijing has continued to maintain the generator as a backup source of energy for heating the city during harsh northern winters.