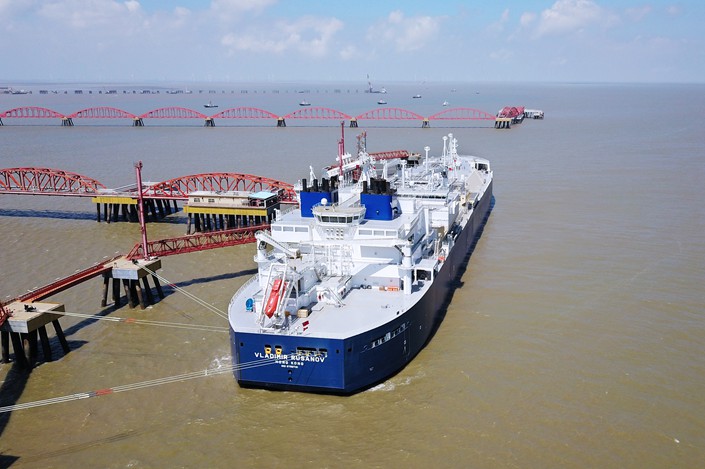 China this week received its first delivery of liquefied natural gas (LNG) from one of the world’s most ambitious LNG projects, in Russia north of the Arctic Circle, just seven months after it began production.

A vessel carrying LNG from the $30 billion Yamal project completed its 23-day journey along the “Northern Sea Route” (NSR), starting from the plant on the Kara Sea in northern Siberia before traveling down through the Bering Strait and arriving at Rudong Port in East China’s Jiangsu province on Thursday. The ship was greeted in an arrival ceremony there by the general manager of China National Petroleum Corp. (PetroChina), which has a 20% stake in the project; the Jiangsu vice governor; and a large gathering of other local officials.

The journey marks the first-ever LNG shipment to China along the NSR, which has the potential to halve the current shipping time of 30 days it takes to use the westward route from Russia via the Atlantic, the Mediterranean Sea and the Suez Canal. While the NSR is currently navigable only between June and November, when Arctic ice retreats, the warming global climate is expected to keep it open longer.

The maiden LNG delivery is the tip of the iceberg in terms of the project’s importance to China. PetroChina forecasts that exports to China from the Yamal project will reach 4 million tons a year in 2020, accounting for a quarter of Yamal’s production. This would constitute 2.6% of China’s current total consumption of gas in all forms, according to the National Bureau of Statistics.

China has increased its LNG consumption substantially in recent years as it looks to reduce the environmental damage caused by its current heavy reliance on coal for power generation. Last year, LNG consumption rose by 46% to 38.13 million tons, allowing China to surge past South Korea to become the world’s second-largest LNG importer after Japan. LNG imports jumped a further 58.2% year-on-year in the first fourth months of 2018, according to the General Administration of Customs.

Despite the enthusiastic embrace of LNG, substantial challenges remain, analysts say. In particular, the U.S. projects have been put in doubt by ongoing trade tensions between Washington and Beijing. Some producers are also concerned that there may be insufficient demand to justify the projected expansion of supply. In July 2017, the $36 billion Pacific Northwest LNG project in Canada was canceled after the companies involved, including both Sinopec and China Huadian Corp. Ltd., decided they could not ensure a sufficient return on their investment.

The Pacific Northwest cancellation should serve as a warning to other major projects, according to Wen Wang, a senior analyst with consultancy Wood Mackenzie. “Not all the projects can progress to a final investor decision (FID). There’s a lot of competition on the supply side right now. A lot of the pre-FID projects have been proposed because the market clearly doesn't need all that volume and so only a small number of the projects will go ahead,” Wang said.

However, she remains upbeat about the prospects of projects already in motion. “Some of the projects have a higher chance of making FIDs than others, especially those that already have reached certain milestones in marketing and those that have strong equity partners,” she said.