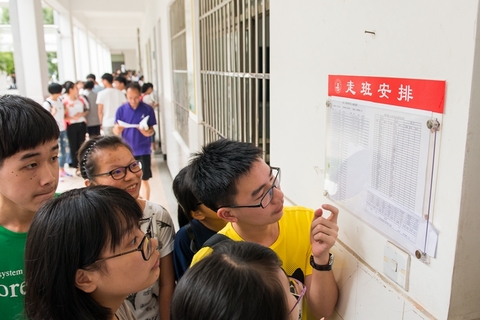 High school students in Zhejiang province look at a new schedule for classes under the reformed gaokao grading system, in August 2015.

China is trying to reform its most important exam — the gaokao, which high school students must pass to attend college.

It is a gargantuan task. The exam dates back more than 1,000 years. Nearly 10 million students across the country took it in June this year. It is the focus of an education system that has spawned $300 million IPOs and school-district property bubbles.

But mounting criticism of a system that relies on a single exam to decide the futures of high school students has pushed the government to roll out plans for change.

In 2014, the central government announced it would cut the number of subjects tested in the gaokao from four to three by 2020. The three standard subjects would be Chinese, math and a foreign language, while the fourth test would be replaced by points earned in three elective subjects studied during the three years of high school.

The reform, which will be implemented locally by regional governments, is expected to address complaints that China’s exam-focused education system has created a workforce without the creativity and independent thinking an innovation-driven economy needs.

Shanghai and neighboring Zhejiang province in 2014 were the first local governments to begin testing gaokao reforms, followed by Beijing, Tianjin, and the provinces of Shandong and Hainan in 2017. A third batch of 19 provinces and cities is expected to roll out pilot projects related to the reforms this year. But local governments including Anhui and Beijing have announced that they are postponing reforms.

Problems ranging from insufficient resources to confusion over the elective subject system are holding local governments back, Caixin found based on interviews with education professionals, students and parents across the country.

Yang Ming (not his real name), a student at Hengshui High School in northern China’s Hebei province, wakes up at 5:30 every morning to do his morning exercises. He begins his studies at 6, gets less than 10 minutes for lunch, and must, after 14 periods of school, go to bed by 10:10 pm each day.

This is the schedule set by his boarding school, one of China’s best-known, thanks to its history of sending alumni to elite universities. Any deviation from the schedule and the many other rules in place on campus will be noted by teachers and fellow students assigned to monitor their classmates, Yang told Caixin. Too many violations will result in expulsion, and many students drop out because they simply can’t handle the stress.

Hengshui High School’s regimented system has been criticized for being the antithesis of what gaokao reformers want for China’s students — a holistic, humanistic environment that fosters creativity and personal development. But it is a style that has the staunch support of pupils’ parents.

More than 80% of students at the school come from other regions, meaning their parents have had to go through the difficult process of relocating their household registration, or hukou, to the city south of Beijing. Schools touting the “Hengshui model” have also been opening across China, including the latest in western China’s Xinjiang autonomous region.

Ironically, the school’s success at producing gaokao high scorers is shaped in part by the city’s relative deprivation. Six of the eight counties in the Hengshui municipal area are officially designated “poverty-stricken,” and the city faces a chronic dearth of teachers thanks to the low pay it can afford to offer, around 3,500 yuan a month for a junior position. So, to maximize efficiency and simplify the tasks of teachers, as many students as possible are squeezed into each classroom, and rote learning is encouraged.

The new focus on holistic grading puts families with lower cultural and social capital at a disadvantage compared with the simpler, one-dimensional, traditional system, according to Liu Haifeng, dean of the Institute of Education at southern China’s Xiamen University.

The dependence on rote learning may be even harder to change in less-developed parts of China — the western and central regions. High schools in these regions have traditionally relied on the gaokao to close the gap with schools in the richer east. But their competitive advantage may vanish under the new system, said Lei Wanghong, a researcher at the Center for Chinese Rural Studies at Wuhan’s Central China Normal University.

Even Zhejiang province, the prosperous coastal province bordering Shanghai that has been in the forefront of gaokao reform, has struggled to adjust.

When the province rolled out its new gaokao scoring system, which requires every student to choose three elective subjects from seven options, the result was more-frequent tests for students like Lin Yue (not her real name), who entered her Hangzhou high school in 2016.

“It seems that the past two years have been one continuous sprint toward the gaokao, and the pace hasn’t slackened for a single moment,” Lin told Caixin. She said she already sat for exams in her three elective subjects ― chemistry, geography and general technology ― in April, at the end of her second year of high school. More exams that will decide her final college admissions score will take place in October and June next year.

Lin considers herself part of an unfortunate batch of guinea pigs. The students who started high school a year later, in 2017, are following a new timetable that pushes the second-year exams back by a few months, giving them more time to prepare.

This is one of several “patches” Zhejiang has put into place for its initial gaokao reform in response to many unintended consequences.

The province’s new scoring system prompted a sudden drop in the number of students studying physics, accompanied by overwhelming demand for humanities subjects that were considered “easier” in which to score well. In November 2016, the number of students taking the high school physics exam dropped from around 75,000 in past years to 12,000, according to figures circulated on social media nearly a year after the exam.

This information alarmed parents and students because the new gaokao scoring system allocated points based on a bell curve incorporating every student taking the same subject. This was to enable universities to compare applicants who were suddenly studying a far wider range of subjects. That meant that the fewer the number of people sitting for an exam, the harder it would be to stay near the high end of the curve.

The Zhejiang government denied the 2016 data on the number of physics exams, calling it a rumor. But the government later promised that if the number of candidates taking a single exam was lower than 65,000, it would still calculate grades as if there had been 65,000 scores.

Another problem schools in the province faced was the fact that the elective courses required far more classrooms and teachers than the old system, which allowed a single class to stay together in the same classroom throughout the school day and be taught by only one teacher at a time.

In 2015, one high school in downtown Hangzhou had to rush to prepare enough classrooms and a new teaching schedule to meet the requirements of the new system.

“Some rooms that weren’t supposed to be classrooms were also repurposed as classrooms,” history teacher Zeng Liang (not his real name) told Caixin.

The root of the problem

China must address longstanding inequalities between schools in richer and poorer areas if it wants gaokao reform to succeed, a staffer from Zhejiang’s provincial examination board told Caixin.

At the same time, there can be no real change in the high school system if colleges don’t change their admissions practices, said Wang Li (not his real name), a high school politics teacher from Jinhua city in Zhejiang.

Provinces get to decide the weight that gaokao results carry for college applications. In Zhejiang the weighting was raised from 50% of the final admission score to 60%. The remaining 40% usually comes from independent testing by colleges and high schools, meaning exams are still the main emphasis for high schoolers.

“They say Hengshui creates robots, but don’t universities do the same thing?” Li Changwei (not his real name), a salesman from the city’s Taocheng District told Caixin. His son was admitted to Hengshui High School three months ago after achieving a high rank in the city’s high school entrance examination.

“This is a problem with the whole system,” Li said. “What will reform change?”