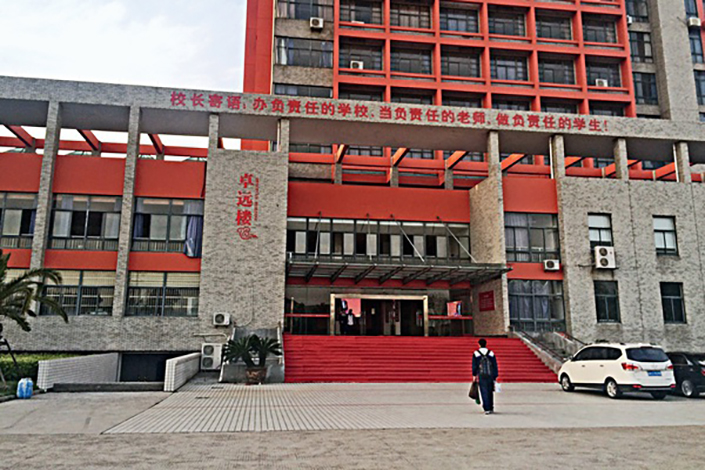 For those familiar with China’s cutthroat university admissions system, Hengshui High School is as legendary as it is notorious.

Located in an unremarkable city south of Beijing best known for walnut drinks, Hengshui High has been a springboard for more student admissions to China’s elite Peking University and Tsinghua University than any other Hebei province school for more than a decade.

And in terms of its graduating students’ college entrance test scores, Hengshui High frequently outperforms even top high schools in Beijing and Shanghai.

It’s an approach that attracts parents passionate about getting their children into the best universities as well as investors targeting new opportunities in the education field. And the government entity that operates Hengshui High has promoted the model by opening similar schools in other parts of the country.

But critics say the model quashes individuality by forcing students to study for long hours in boot-camp-like conditions. They also claim it leaves students barely prepared for adult life after college.

In Zhejiang province, for example, educators fear poaching practices by a Hengshui High-brand school in the coastal city of Pinghu called the Hengshui High School Pinghu Campus will not only rob other schools of talented students and resources, but also push them toward adopting a gaokao-focused learning system.

The Pinghu school, which is scheduled to open next fall, is now recruiting students for its inaugural class. An opening ceremony was held March 26.

At a forum April 11 where educators discussed the impact of the Pinghu school on Zhejiang’s future, one high school principal lashed out at the new approach to learning and student poaching practices.

But it may be too late. As of April, officials said, the Pinghu school had received more than 400 student applications for 90 open slots.

Hengshui High School in Hengshui, a city of about 4 million about 250 km south of Beijing, has been launching affiliate schools based on the controversial education system nationwide since 2006. It now has 17 affiliated schools in eight provinces, with each school supported by educators, investors and local governments.

For example, he said, a student in Pinghu whose high school entrance test score points to the likelihood of a gaokao score high enough for admission to Peking or Tsinghua could be offered a substantial scholarship. Students who eventually do get into these schools are given cash prizes, some as high as 500,000 yuan ($72,500). Since Pinghu’s tuition is set at 35,000 yuan a year, the family of a scholarship-winning student can pocket a substantial sum.

PPPs have become increasingly common in China’s education sector, according to Wu Hua, director of the Private Education Research Center at Zhejiang University. Local governments contribute land needed for a school campus with the goal of improving local educational offerings, while investors join to profit from future tuition payments and build good will among local officials with whom they can pursue other business ventures, Wu said.

A school with a model worth imitating can license its brand name and charge investors annual “management fees” totaling tens or even hundreds of millions of yuan, according to Zhou Guangli, vice dean at Renmin University School of Education in Beijing.

The Pinghu school is backed by the original so-called super school as well as a private investor called Guangzhou High-Tech Group and a government-backed port operator in Zhejiang called the Jiaxing Port Management Committee.

Guangzhou High-Tech previously invested in a Hengshui High-brand school in Fushun. Officials in Jiaxing, a prefecture-level city that includes the county-level city of Pinghu, hope the new school will boost area development by attracting students from nearby Shanghai.

Under the Hengshui High system, each student’s entire schedule is meticulously predetermined down to the minute. Study begins daily at 5:30 a.m. and ends at 10 p.m., with only one day off per month.

Students board on campus, eat only what’s served, and wear only those clothes — including pajamas — approved by the school. Even hairstyles are tightly controlled.

The school’s supporters say students score well on entrance exams due to superior teaching. They also call it a beacon of hope for disadvantaged students from rural backgrounds for whom the school offers a chance to climb out of poverty by helping them score well on college entrance tests.

But Zhejiang’s primary education director, Fang Hongfeng, said the model is “backward” and at odds with the province’s push to promote holistic learning.

And while many people accept the claim that most Hengshui High students come from rural families, a 2014 graduate of the school told Caixin that none of more than 100 fellow graduates had a farming background.

Researchers say Hengshui High and other super schools that focus on preparing students for the gaokao are actually exacerbating China’s urban-rural education gap.

Some 44% of the students admitted to Peking University in 2009 attended one of these schools, compared to 35% in 2005, according to a research team led by Peking researcher Hou Xiaoting. But only a small percentage of these newly admitted students hailed from rural areas, the team found.

In 2016, 120 of the 281 students from Hebei province admitted to Peking University and Tsinghua attended a Hengshui High-brand school.

Zhejiang University’s Wu said the concentration of educational resources in China’s cities — not super schools — is the main reason for the quality gap separating urban and rural education systems.

Zhejiang has been working toward an urban-rural balance by adopting reform measures, such as an adjusted gaokao system introduced in 2014 that gives students some freedom to tailor tests according to their educational interests.

Zhang Duanhong, a lecturer on higher education at Tonji University in Shanghai, said the demand for high gaokao scores is a driving force even in reform-minded Zhejiang. The only difference between the Hengshui High model and those at other high schools is the degree to which students are pushed, he said.

“As long as the gaokao remains the primary means for college admissions, the exam-based education model will prevail,” Zhang said.