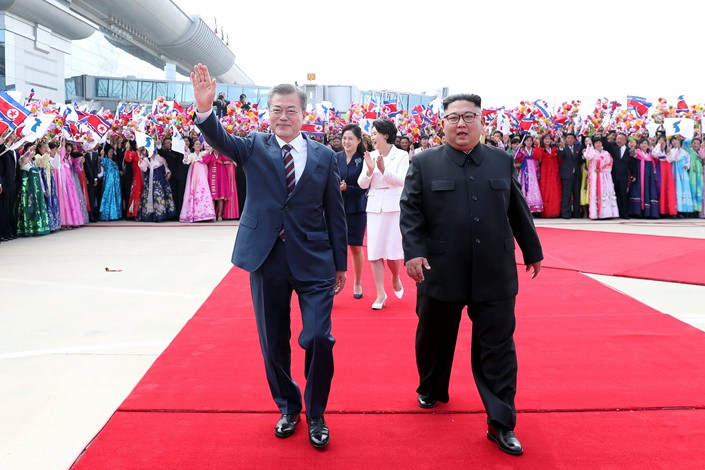 (Bloomberg) — North Korean leader Kim Jong Un greeted South Korean President Moon Jae-in in an elaborate welcoming ceremony as he arrived at Pyongyang airport Tuesday for a landmark visit to salvage stalled nuclear talks between the regime and the U.S.

Thousands of North Korean men and women waved flowers and flags as Kim and Moon shared smiles and handshakes on the tarmac, a warm start to the first visit by a South Korean leader in 11 years. A band played while the leaders greeted senior officials from both countries on a red carpet in front of a large crowd, which displayed a banner saying North Koreans “passionately welcome” Moon.

The three-day trip will feature a joint press appearance on Wednesday with Kim, who has resisted American attempts to spell out a timetable for giving up his nuclear weapons. Talks have stalled just three months after he met U.S. President Donald Trump in Singapore, with Kim saying the U.S. needs to reciprocate for the country’s dismantling nuclear and missile test sites.

Kim is pushing for a peace declaration with the U.S. before he takes concrete steps toward getting rid of his nuclear capability. American strategists fear such a declaration will bolster arguments to ease sanctions on North Korea — one of the biggest pieces of leverage Trump has left — and draw down the U.S. military presence in South Korea.

“I will have candid talks with North Korean leader Kim Jong Un to find common ground between the U.S. demand to denuclearize and the North Korean demand to end their hostile relations,” Moon said at a meeting with his top aides on Monday. “What I am trying to achieve is peace. Not a temporary change that can be swayed by international conditions, but an irreversible and permanent peace.”

Moon flew with a roughly 200-person delegation that includes government officials, the billionaire heir of Samsung Electronics Co. Ltd. and other executives from South Korea’s largest conglomerates. Besides formal meetings, Moon and Kim will watch art performances and enjoy a lavish welcome banquet.

It’s only the third visit ever by a South Korean president to Pyongyang. In 2000 and 2007, two of Moon’s predecessors — who adopted a similar engagement policy — had met with Kim Jong Il, the current leader’s late father, in the city.

Moon arguably has a tougher job this time around: The world is counting on him to persuade Kim to commit to something that goes beyond the vague denuclearization promise delivered in April. While Kim has stopped the missile launches and nuclear tests that rattled the world last year, he still retains the capability to strike the U.S. homeland with a nuclear weapon.

Moon is aware that any progress on inter-Korean relations will be limited if Kim fails to agree on specifics to end the North’s nuclear program, including giving a list of its nuclear facilities to the U.S. and accepting international inspectors. The South Korean leader is betting on momentum toward peace to strengthen his own country’s economy and bolster his sliding approval ratings.

Before the summit, Moon’s office tried to temper any rosy expectations on denuclearization, saying it was the first time it would be discussed by leaders of the two Koreas.

“The heavy burden of denuclearization is weighing on the summit,” Im Jong-seok, Moon’s chief of staff, told reporters on Monday. “This is why we are very cautious and it is difficult to give any optimistic outlook.”

A joint statement that could be announced as early as Wednesday morning will contain an agreement to reduce military tensions on the heavily guarded inter-Korean border, Im said, but a denuclearization deal will depend on “sincere talks” between the two leaders. The prospect of economic cooperation will also be limited, he said.

“There are quite strict sanctions from the international community that are being enforced, so there is a clear difference between what we can act upon and what we can’t do,” Im said.

The Trump administration is stepping up efforts to sustain sanctions against North Korea, even as South Korea and other Asian nations look for potential investment opportunities with Kim’s regime and Washington accuses Moscow of backtracking on the restrictions.

While the U.S. has previously accused both China and Russia of violating the sanctions, Haley aimed her criticism Monday squarely at Russian President Vladimir Putin’s government, accusing it of successfully pressuring a supposedly independent U.N. panel to water down a report on the implementation of sanctions.

“Why after voting for sanctions 11 different times is Russia backing away from them?” Haley said Monday. “We know the answer. It’s because Russia has been cheating. And now they’ve been caught.”

While maintaining maximum pressure on Pyongyang, Trump has also expressed an openness to meeting Kim again for another summit. Moon is due to attend the U.N. General Assembly next week where he will meet Trump on the sidelines and continue his efforts to facilitate talks between the U.S. president and Kim.

“We are working with the international community on sanctions,” said Moon’s spokesman Yoon Young-chan on Tuesday when he was asked to comment on the U.N. meeting.