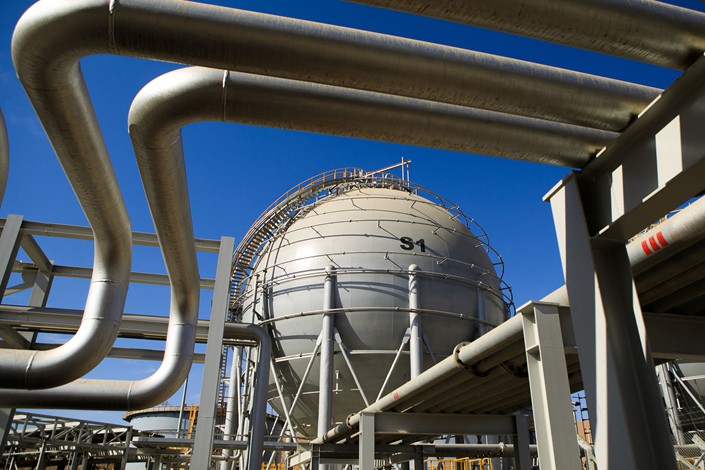 China will levy a 10% duty on U.S. liquefied natural gas in retaliation for a fresh round of tariffs announced the day before by Washington.

The Asian nation said in a statement Tuesday it would levy a 10% duty on liquefied natural gas (LNG) starting Monday, retaliation for a fresh round of tariffs announced the day before by the U.S.

While China’s levy is less than the 25% it proposed last month, the tariff still brings additional pressure to bear on the U.S. gas industry, which is competing with Russia, Australia and Qatar for market share in China, the world’s biggest buyer. Just last year, American officials were courting Chinese companies to invest in new export projects.

China’s move signals how much pain Xi Jinping and Donald Trump are willing to endure not to back down from a trade fight. Trump risks stifling the U.S. gas export industry, which is seeking about $130 billion to fund more than a dozen projects, while Xi threatens to raise the cost of his drive to eliminate smog by burning less coal.

“The proposed 10 percent tariff as opposed to 25 percent is not as harsh, but will still push Chinese buyers to other potential sellers in Asia and the Mideast,” Madeline Jowdy, senior director of global gas and LNG at S&P Global Platts in New York, said in an email. The duties mean “the U.S. will be considered less of a low-cost option.”

China’s push to use more natural gas is driving global demand growth, with LNG imports jumping 47% in the first seven months of the year. Though it’s the third-largest buyer of U.S. cargoes, American supply made up a little less than 6% of purchases over that period, according to Sanford C. Bernstein & Co. If U.S. companies can seize 20% of the market by 2030, it could lower the trade deficit with China by $50 billion, Bernstein estimates.

Higher oil prices and a surge in LNG demand have reignited interest in export ventures, with about 15 U.S. projects targeting final investment decision this year and next, the most of any nation, according to Bloomberg NEF. Projects have been seeking investments or off-take agreements from China, which earlier this year topped Japan as the world’s biggest gas importer.

On Monday, Cheniere Energy Inc., America’s first and biggest shipper of shale gas, struck a 15-year agreement to sell the fuel to commodities trader Vitol Group. The pact is Cheniere’s fifth this year. Venture Global LNG Inc., which is developing a terminal in Louisiana, has finalized four such contracts over that period.

Liquefied Natural Gas Ltd., which has yet to make a final investment decision on the $4.35 billion Magnolia LNG project in Louisiana, expects Chinese buyers will wait for uncertainty on tariffs to be removed before signing contracts, CEO Greg Vesey said Monday at an industry conference in Barcelona.

“This has definitely given potential Chinese investors and buyers of U.S. LNG reason to consider whether this is a long-term commitment they can count on,” said Jason Feer, head of business intelligence at ship broker Poten & Partners Inc.

Nations like Australia and Qatar, which compete with the U.S. for LNG market share, could benefit from the trade tensions, S&P Global Platts’ Jowdy said.

“Legacy sellers such as Qatar have significant volumes of unsold LNG emerging in the 2020s,” she said. “It is clear that trading companies and portfolio players are making alternative plans for U.S. LNG volumes that had been earmarked for China this winter.”

The vessel GasLog Greece, which left Cheniere’s liquefied natural gas export terminal in Louisiana on Aug. 15 en route to China, changed its destination mid-journey to South Korea. It was one of at least two U.S. LNG shipments heading for China during the past month. The other ship, Rioja Knutsen, arrived Sept. 3 at Tianjin.