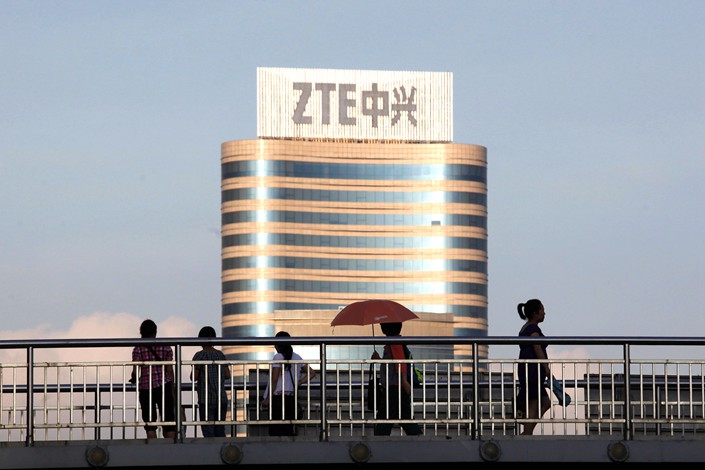 The ZTE building in the Nanshan Hi-Tech Industrial Estate in Shenzhen, Guangdong province, is seen in June 2017. Photo: VCG

Embattled ZTE Corp. is selling land and property assets for at least 2.2 billion yuan ($321 million) to cope with its liquidity crisis, after being slapped with a $1.4 billion fine by the U.S.

China’s second-largest telecom-equipment maker has signed a framework agreement to transfer assets at an industrial park in the southern city of Shenzhen to equity investor Shenzhen Investment Holdings Co. Ltd., according to a ZTE filing to the Hong Kong Stock Exchange on Wednesday.

While ZTE didn’t say how much the sale will bring, it said Shenzhen Investment will pay a first installment of 2.2 billion yuan after the contract comes into effect.

ZTE has been under the gun since April, after the U.S. Commerce Department determined the company violated a previous agreement enforced as a punishment for selling American-made products to Iran in violation of U.S. sanctions. Washington initially cut off ZTE from all of its U.S. suppliers, a move the company called a threat to its existence, but in July, U.S. authorities relented and reached a new deal, fining the company over $1 billion and forcing it to completely overhaul its management.

The fine is expected to put ZTE in the red for the first three quarters of this year, with a net loss of as much as 7.8 billion yuan. This is despite that the company, which posted its worst-ever first-half loss this year, said it would return to profitability in the third quarter, with income of between 24 million yuan and 1 billion yuan.

Bloomberg News reported Wednesday that a new bipartisan U.S. Senate bill would reinstate sanctions, including banning the company from purchasing U.S. parts if it violates the July deal. The bill would also have to be approved by the U.S. House and signed by President Donald Trump to become law.

“With China’s communist government posing the greatest, long-term threat to the United States, we must continue to confront ZTE’s real risks to our economy and national security,” Senator Marco Rubio, one of the lawmakers behind the bill, said in an emailed statement quoted by Bloomberg. “While it was a mistake to reach a ‘deal’ with ZTE in the first place, this bill will ensure ZTE is finally put out of business if it does not hold up its end of the bargain.”

Some lawmakers on both sides of the U.S. political aisle are still skeptical that ZTE is fully complying with U.S. trade and security laws, the report said.