By Wu Yujian and Fran Wang 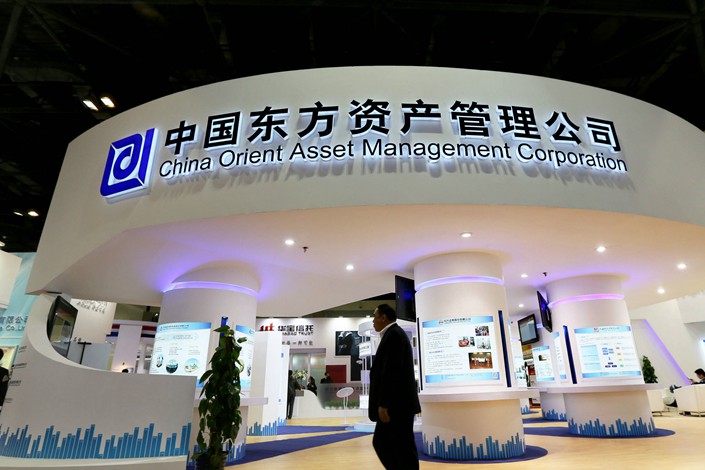 *One of China’s state-owned bad-debt managers has agreed to take on $2.9 million in soured loans from peer-to-peer lending platform CreditFinance

*While regulators have called on the bad-debt managers to help stabilize the lenders, the unusual circumstances of this deal mean it is unlikely to serve as a template for other debt takeovers

(Beijing) — One of China’s four state-owned distressed-debt managers agreed this week to take over some overdue loans from an online peer-to-peer (P2P) lending platform, the first such deal since financial regulators called on the institutions to help stabilize a market that's been roiled by failures and scandals.

The Tianjin branch of China Orient Asset Management Co. Ltd. on Wednesday signed an agreement to buy 20 million yuan ($2.9 million) in delinquent loans from Shenzhen-based P2P platform CreditFinance, Caixin learned from sources with knowledge of the matter. China Orient Asset Management, in which the Ministry of Finance owns a majority stake, is the third largest of four national asset management companies (AMCs), which was originally set up to buy the bad debts of the big four state commercial banks.

The loans were taken out by a listed company that is currently being restructured by China Orient, which bought the debt at its face value, the sources said. The deal involves the purchase of the debt only and doesn't include missed interest payments.

The China Banking and Insurance Regulatory Commission (CBIRC) last month held a meeting with senior executives of the four AMCs to discuss ways to contain risks from the growing chaos in P2P lending and boost investors’ confidence in the industry which has seen a wave of defaults and platform closures since June.

CreditFinance started negotiations with China Orient in July and the talks gained momentum after the CBIRC convened the meeting in mid-August, an employee of the platform, who declined to be named, told Caixin.

But the chances of the deal becoming a benchmark to be replicated throughout the sector are slim because of the special circumstances involved, executives from both CreditFinance and China Orient, and other industry insiders, told Caixin.

“The agreement was not intended to address the P2P platform’s problem,” said an employee of China Orient, who spoke on condition of anonymity. “The AMC was actually repaying the debt on behalf of the listed company it is restructuring, which happened to have borrowed from the P2P platform.”

CreditFinance’s agreement with investors who lent money through the platform allowed the company to recover on their behalf any overdue loans. That provision lowered the legal barriers to the sale of any soured debt to a third party and made the negotiations easier, sources said. In addition, China Orient bought the delinquent loans at their full face value, avoiding the need for CreditFinance to obtain each investor’s consent to sell bad loans at a discount, the lender's employee said.

AMCs usually demand a discount of 50% or more when they negotiate the purchase of delinquent loans from P2P platforms to reflect their low quality and high risk of non-recovery, sources said.

“It is rather difficult for AMCs to carry out due diligence (into the assets of P2P lenders),” another source familiar with the deal said. “They also have quite strict core asset assessment standards. On that basis, I think the room (for more such deals) is limited,”

Involving the four AMCs in government efforts to deal with the growing financial problems in the P2P industry can help stabilize the market because it increases investors’ expectations that they will be able to recover most of their investment, Chen Wen, founder of private think tank BG Finance, wrote in an article published after the CBIRC meeting with the AMCs last month.

But such an approach is not without risk, he wrote. “If prices the four AMCs pay for the loans are too high, they may suffer losses and … the acquisitions could be regarded as a government bailout for P2P problems, which goes against the principle of market reform.” If prices are too low, it could stoke investors’ anger that they aren’t getting a fair deal, which raises concerns about the potential for social instability, he said.