By Ye Zhanqi and Ke Dawei 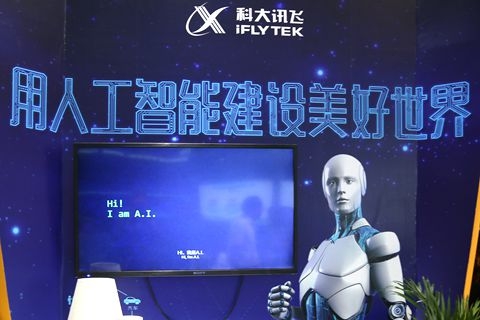 One of China’s leading voice recognition companies has been accused of failing to give recognition where recognition is due, crediting its AI technology with translation work done by its human staff.

Shenzhen-based translation and tech company iFlytek Co., Ltd. was accused of claiming to have used its language software to translate speakers in real time at the 2018 International Forum on Innovation and Emerging Industries Development in Shanghai on Thursday.

When a Japanese professor was delivering a speech in Japanese, for example, the audience was led to believe that the transcription of his speech into Chinese that was projected on a screen behind him was the work of AI wizardry.

This was not the case, according to a post made the same day (link in Chinese) on Chinese Q&A website Zhihu from a disgruntled translator named Bell Wang. Bell said the translations at the conference came from a human team, and that the efforts by the company’s AI program were riddled with errors, translating “Davos Forum” as “Devil’s Forum,” for example.

“I came to the International Conference Center early this morning. I thought it was a day of regular meetings. I didn't expect to be deeply disgusted,” Bell said.

The news did not have an immediate effect on IFlytek’s stock price traded on the Shenzhen Stock Exchange, perhaps indicating that Chinese investors have become numb to such scandals involving tech companies. Volatility may follow when trading resumes on Monday, however.

On Saturday, iFlytek’s CEO took to Weibo, China’s equivalent of Twitter, to deny misleading anyone. “Everyone knows that iFlytek's transcription machine and the simultaneous translation service are completely different.”

A sales representative for the company told Caixin that while its machines can translate English into Chinese, Chinese into English still relies on manual translation, and that the company views a mix of man and machine as the optimal translation solution. It charges around 20,000 yuan ($2,900) for a half day of its Chinese to English service.

The accusation comes a month after Chinese startup Redcore issued an apology after claiming to have built China’s first fully homegrown web browser, only for it to emerge that the source code had relied heavily on free-to-use code from Google LLC’s popular Chrome browser.

The iFlytek incident is not the first time a Chinese company has landed itself in trouble over its translation software. Last October Chinese messaging app WeChat apologized after its translation feature was found to be translating a neutral Chinese term for black foreigners into the N-word.