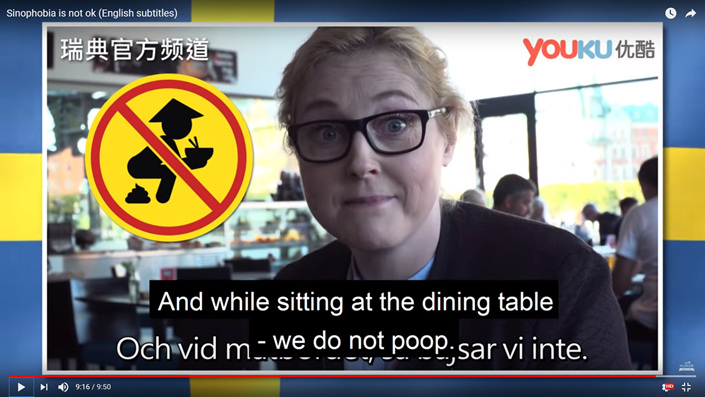 China’s Foreign Ministry has demanded an apology from a Swedish TV program that broadly mocked Chinese tourists, which followed a recent dispute between three Chinese tourists and a Stockholm hostel that initially sparked criticism of the tourists among Chinese internet users.

Swedish state television broadcaster Sveriges Television AB (SVT) has refused to apologize, saying that the satirical nature of the program may have been lost in translation, but acknowledged that a brief video clip from the show that was uploaded to Youku.com could easily be taken out of context.

“We do not poop outside historic buildings,” a hostess said in the video, while pointing to a sign that reads in Chinese: “No Defecating”（禁止大便）with an illustration of a squatting person wearing a bamboo hat and holding a bowl with chopsticks in it.

The SVT video also claimed that “another important cultural difference is that you Chinese are racists.” While saying that in Sweden, all people — including blacks, Arabs, Jews and homosexuals — have equal value, the hostess claimed that the principle does not apply in China.

The Chinese government on Monday slammed the program as a “gross insult” and “vicious attack” on China and its people.

“The program leader’s comments are full of prejudices, biases and provocations against China and some other ethnic groups,” Chinese Foreign Ministry spokesman Geng Shuan said in a statement. “It is a serious violation of media professional ethics. We strongly condemn that.”

The Chinese Embassy in Sweden also lodged a strong protest on Saturday over the program’s showing of a China map that is missing Taiwan and part of China’s Tibet autonomous region.

The program also alleged that the Chinese government has been busy oppressing ethnic groups such as Tibetans, Uygurs and Mongolians.

The Chinese Embassy accused the SVT program and its host, Jesper Ronndahl, of instigating racial hatred against China and other ethnic groups. The Chinese Embassy on Tuesday also urged SVT to “make a sincere apology immediately.”

The program came in the wake of a recent diplomatic row between Sweden and China involving a Chinese tourist surnamed Zeng and his parents. One week ago, the Chinese Embassy accused Swedish police of “brutally abusing” the Zeng family. The problem started when the family arrived at a Stockholm hostel around a half-day early for their reservation. After hostel employees refused to allow them to stay overnight — and the family refused to leave the premises — police removed the family, dropping them off at a park that contains a historic cemetery.

Chinese netizens were divided over the incident. While some said the police should not have used force, many others said that the hostel had the right to ask the family to leave and then call the police when they refused.

However, the opinion of Chinese internet users shifted after SVT’s satire program aired on Friday. Commentators were angered by a 90-second clip of the program that was uploaded to Youku.com, one of China’s most popular video-streaming sites. The clip, which featured a Chinese-language voice-over that was absent from the original Swedish version, focused on “tips” for Chinese tourists to “avoid cultural clashes” and touched on matters such as defecating in public.

“The TV channel must apologize,” one user wrote on Sina Weibo, the Chinese equivalent of Twitter. “You should focus on Mr. Zeng. If he was the one who did something wrong, why attack other Chinese people and the country?”

“They meant to provoke us by posting the video on Youku in Chinese!” another user wrote.

The Swedish broadcaster insists that it has not done anything wrong. “I think it is so apparent that this is comedy, assuming that you know Swedish. But at the same time I understand that if you don’t know Swedish, it is possible to misunderstand,” SVT entertainment chief Thomas Hall said.

In a statement published on Monday, SVT said it made a mistake by not uploading the whole program onto China’s YouTube equivalent, Youku.com, which caused the program’s main message to be lost.

However, SVT Program Director Jan Helin said that the broadcaster will not apologize for the program, and insisted that Chinese authorities should be able to distinguish between satire and news.