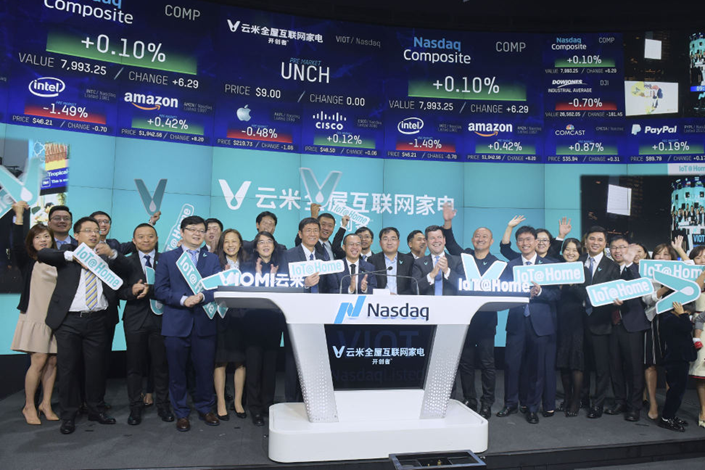 Viomi Technology Co. Ltd., a provider of smart appliances to smartphone-maker Xiaomi Corp., saw its shares rise by 20% during its first trading day in New York City on Tuesday before closing near the listing price.

Viomi has benefited from its close ties to Xiaomi, which is developing an ecosystem of interconnected high-tech products and services. Huami Corp., a maker of fitness wristbands with a similarly close relationship to Xiaomi, raised $110 million in its New York listing in February.

Founded in 2013, the Guangdong-province-based Viomi makes Xiaomi-branded “internet of things” home appliances such as dishwashers and air and water purifiers that can be controlled through an app and that can communicate with each other.

Viomi said its platform is used by over 1.2 million households as of June. Last year, the company’s net income rose 473.5% to $14.1 million on a revenue of $132 million, according to an earlier company filing.

Viomi’s performance is deeply linked with that of Xiaomi, which has given Viomi access to the users of its budding ecosystem as well as its market and data resources. In 2017, 739.5 million yuan ($107.7 million) of Viomi’s sales came from Xiaomi-branded products, 84.7% of its total net revenues for the year, the filing showed.

Xiaomi is the world’s No. 4 smartphone-maker and raised $4.72 billion in July in the world’s biggest tech listing in four years.