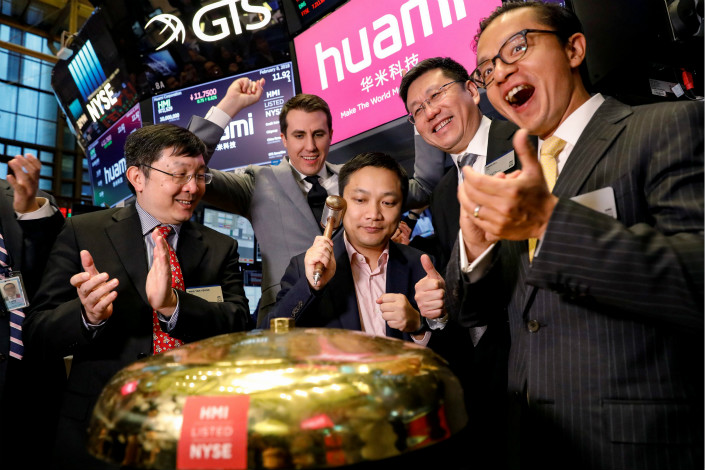 Huami Corp. CEO Wang Huang rings the opening bell at the New York Stock Exchange to mark his company's listing on the bourse on Feb. 8. Huami shares finished their first trading day on Thursday at $11.25, up about 2.3% from their initial public offering price. Photo: VCG

Shares of Huami Corp., a maker of fitness wristbands backed by smartphone maker Xiaomi Inc., rose modestly in their trading debut, as the company raised $110 million in the first major New York listing by a Chinese firm this year.

Huami shares finished their first trading day on Thursday at $11.25, up about 2.3% from their initial public offering (IPO) price. The company had priced its American Depositary Shares (ADSs) at $11, representing the middle of a previously announced range of $10 to $12. The closing price gave the company a market value of about $670 million.

Its gains contrasted with a major sell-off on Wall Street, which saw most of the major indexes shed around 4% for the day, marking the second major decline this week.

Huami has benefitted from its close ties to Xiaomi, one of China’s leading smartphone makers that is developing an ecosystem of interconnected high-tech products and services. Xiaomi owned about 19.3% of Huami’s shares before the listing, while Xiaomi founder Lei Jun was part of a group that owned another 20.4%, according to Huami’s prospectus.

The offering is the first major one by a Chinese firm in New York this year, extending a string of similar IPOs dating back to last fall. Many of those have come from the financial technology sector, which has seen recent big volatility due to a regulatory clampdown at the end of the year.

Huami’s listing also comes as its much larger backer Xiaomi prepares for its own IPO later this year, most likely in Hong Kong. Xioami has selected Goldman Sachs, Morgan Stanley, Credit Suisse and Deutsche Bank as international banks for the offering, sources close to the matter told Caixin last month. The company is still in talks with domestic investment banks, including CITIC CLSA, China Renaissance and China International Capital Corp., the sources added.