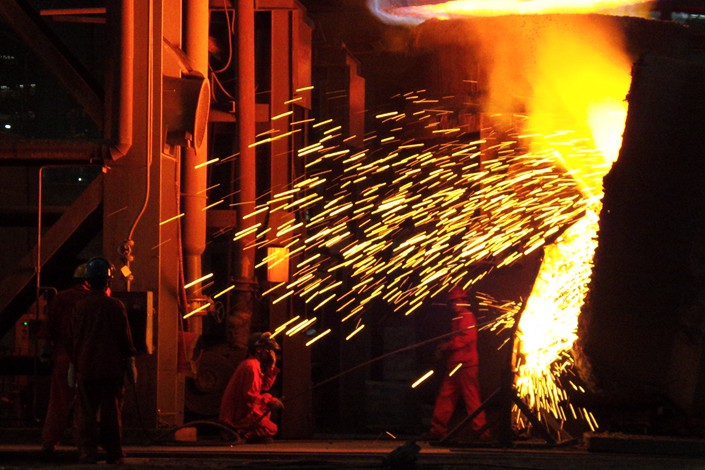 New industrial data for August suggests China’s industrial companies are coming under strain from the trade war with the U.S. as profit growth decelerated for the fourth month in a row.

Industrial profits grew by 9.2% to 519.69 billion yuan ($75.57 billion) last month, with the growth rate down from 16.2% a month earlier, according to data published Thursday (link in Chinese) by the National Bureau of Statistics (NBS).

The August data dragged down the average annual profit growth rate for the year so far, which stands at 16.2% for the first eight months of 2018, 1.1 percentage points lower than that of the January-to-July period. Industrial growth has been decelerating since March.

Explaining the figures in an accompanying statement, NBS official He Ping said the slowdown was due to slowing revenue growth and rising prices, as well as adjustments in how data is collected compared with a year earlier.

There is some evidence that state-owned enterprises (SOEs) are picking up the slack for industrial companies hit by the trade war. SOE profits rose 26.7% between January and August compared with the same period last year, with mining and metal companies in particular experiencing strong growth.

Pang said that the jump in SOE profits could be the result of government fiscal stimulus, such as funding railway and other infrastructure projects, to boost growth as the trade war dents business confidence. “Overcapacity reform has stopped since the start of the trade war in the middle of the year. In fact, financial deleveraging has become re-leveraging as interest cost has lowered quickly,” she wrote.

Official numbers suggest industrial SOEs are still reducing their debt burdens. According to NBS data, the overall asset-to-liability ratio of industrial companies fell 0.5% year-on-year to 56.6% in August, and decreased by 1.4% to 59.3% for SOEs in the same period.

However, data from the Bank for International Settlements released earlier this week showed that nonfinancial corporate debt is rising again as a percentage of gross domestic product (GDP) after a year and a half of deleveraging from its mid-2016 peak. The ratio jumped to 164.1% in the first quarter of 2018 from 160.3% in the final three months of 2017, erasing more than half of the progress Chinese companies had made in reducing their respective debt loads over the period.

The Asian Development Bank (ADB) expects China’s economy to expand by 6.6% in 2018 thanks to the governments supply-side reforms and other monetary and fiscal measures, according to an update to its “Asia Development Outlook 2018” report, released Wednesday. However, it revised its growth figure for 2019 down 1 percentage point to 6.3% to reflect growing financial uncertainty brought by the trade war.

Commenting on the new industrial profit data, Goldman Sachs noted that “we continue to see headwinds to industrial profit growth in the rest of the year, based on our expectation of gradual moderation in industrial production growth, as well as potentially slower PPI (factory-gate) inflation.”