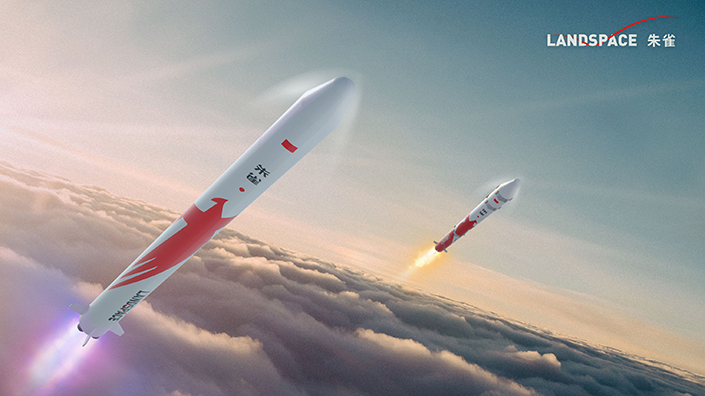 In just three years, Landspace, a private Chinese space technology research firm, has raised more than 500 million yuan ($73 million), a staggering amount for a startup, with more funding likely on the way to fuel future growth.

The Beijing-based firm has grown into a company with more than 200 employees, up from dozens three years ago, according to Zhang Changwu, Landspace’s founder and CEO.

“With the government’s support and rising demand for space technology, this may be the best time for private space companies to invest,” Zhang said.

Landspace is among a growing number of private companies in China to make foray into space tech, an ambition fuelled by U.S. company SpaceX’s success, as well as a shift in China’s space policies over the last few years as Beijing has sought to bring in the private sector to help it gain an edge in space technology.

In 2015, president Xi Jinping proposed a new space strategy known as “military and civilian integration,” which acknowledged the important role and higher efficiency of the private sector in such an endeavor.

This came after the State Council, the country’s cabinet, released a guideline a year earlier that allowed private funds to invest in areas, such as satellite launches, that had once been off limits.

More than 60 private Chinese companies have invested in the space technology industry over the past three years, the state-run Xinhua News Agency reported in May, citing a report from Beijing-based space technology commercialization research institution Future Aerospace.

The global market for space technology is already somewhere between $20 billion to $30 billion, and is expected to grow by another $80 billion in satellite launch segment alone over the next two years, according to Landspace’s Zhang.

Landspace, which focuses on engine design and small and midsize carrier launches, tested a liquid oxygen/methane engine in March and has just unveiled a more powerful engine this month, Zhang said in a recent interview with Caixin.

The company has already seen money flow in from sales of engines and technology such as a rocket attitude control system, but has yet to break even.

Landspace isn’t the only player that has been hotly pursued by investors. iSpace, founded in 2016, launched a sounding rocket “Hyperbola-1S” in Hainan province in April. The company has raised 600 million yuan to date from 10 investors including Shunwei Capital, an investment firm founded by Xiaomi Corp. Co-Founder and CEO Lei Jun.

A Beijing-based private firm, OneSpace Technology, launched a rocket capable of delivering a 100-kilogram load into orbit 800 kilometers above Earth.

A Beijing-based fund manager with investments in several private space technology firms, who declined to be named, said that private companies could thrive in launching small, low-orbit satellites that are used primarily for navigation, communication and Earth observation. This is because big state-run space technology companies are less competitive in terms of cost-effectiveness. However, he warned of a potential investment bubble. “For example, I know that a company originally planned to launch 24 to 36 satellites this year, but they actually only launched five or six satellites, indicating a big gap between demand and supply,” the investor said.

“Though the government encourages private companies to be involved in the industry, I personally think there is little room for them,” said an aerospace expert.

“My understanding of the nation’s policy is that private companies can only play a supplemental role, and the government is not ready to share core technologies with them,” said the expert, who works for a state-owned rocket research center. He asked not to be named because he wasn’t authorized to speak to media.

Although it seems that China’s private rocket market is growing rapidly, it remains in doubt whether private companies are able to develop their own carrier rockets, such as those that haul satellites into space. Instead, many including iSpace are only capable of developing sounding rockets — those designed only to collect scientific data and conduct engineering tests, a capability China has had since the 1950s, according to the expert.