By Zhang Yuzhe and Ke Baili 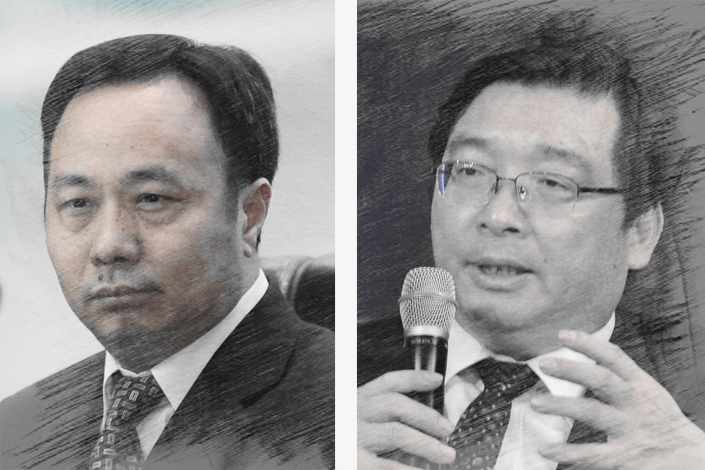 New leadership at CDB, Agricultural Bank: China Development Bank (CDB), one of the three state-owned policy banks, will soon have a new chairman — Zhao Huan (赵欢), who has been president of China’s third-largest commercial bank by assets, the Agricultural Bank of China Ltd. (ABC), since 2016. Zhao built his career at China Construction Bank Corp., another of the big-four state-owned commercial banks, after completing a degree in engineering. He was president of China Everbright Bank before joining the ABC. Zhao’s replacing Hu Huaibang (胡怀邦), who’s been with the CDB since 2013 and is retiring.

ABC’s new president will be Zhu Hongbo (朱洪波), who currently chairs the board of supervisors at China Everbright Group Ltd. Zhu’s already got 20 years of experience at the ABC, having previously served as vice president among other positions.

ABC, the watchdog trainer: With nearly half a million employees, the most among all the big-four lenders, the ABC has also seen more of its alumni going on to hold senior regulatory positions than any of the others. Three heads of the securities regulator (CSRC) — including the incumbent, Liu Shiyu (刘士余) — two heads of the insurance watchdog (CIRC), one banking regulator (CBRC) chief, and one central bank (PBOC) governor have all passed through the bank. Note that CBRC and CIRC were merged earlier this year.

CDB rundown: As a policy bank, the CDB is responsible for financing development projects in areas where commercial banks might fear to tread. Infrastructure, poverty alleviation and slum redevelopment are its bread and butter. Mega-projects like the Three Gorges Dam were also substantially funded via the CDB. It’s also heavily involved overseas; earlier this month, for instance, the bank said it had channeled more than $50 billion to 43 African countries in investment and financing.

Fallout from rape allegations against JD.com’s Richard Liu: Shares of China’s No. 2 e-commerce company JD.com Inc. sank to a low not seen in nearly two years earlier this week, after Reuters published details of what happened on the evening of an alleged rape by founder and CEO Richard Liu (刘强东). Here’s more on this from Caixin.

Aluminum dynasty handover: The billionaire chairman of Shandong Weiqiao Pioneering Group Co. Ltd., Zhang Shiping (张士平), is handing over the reins to his son, Zhang Bo (张波), according to reports by The Beijing News.

You may not have heard of Weiqiao, but it’s one of the biggest private companies in China, and ranked 185 on the Fortune Global 500 this year, with annual revenue of over $53 billion. Zhang senior started the business in the 1980s as a cotton manufacturing company, and it has since morphed into a vast aluminum and power generation empire. Weiqiao has been hit hard by stricter environmental regulations, and has been forced to shutter many of its aluminum plants in recent years.

Roof of the World gets new boss

China’s vast and mountainous western province of Qinghai, which forms part of the world’s highest plateau, will have a new governor. Liu Ning (刘宁), the current vice governor and acting governor, will officially replace Wang Jianjun (王建军), who left in August.

The water bureaucrat: Liu has spent many years dealing with China’s hugely complex water management system. He’s been a vice minister at the Ministry of Water Resources, and was also involved with the South-North Water Transfer Project, a decades-in-the-making mega-project that’s channeling water from the Yangtze River up to China’s more arid north.

His position in Qinghai makes a lot of sense. The Qinghai-Tibet Plateau, known as the Roof of the World, covers most of this glacier-studded province, which is home to China’s largest lake and is the source of the Yellow, Yangtze and Mekong rivers.

We’d love to hear some feedback — if you think we’re missing important moves, or if you’ve any other comments on this newsletter, please let us know.