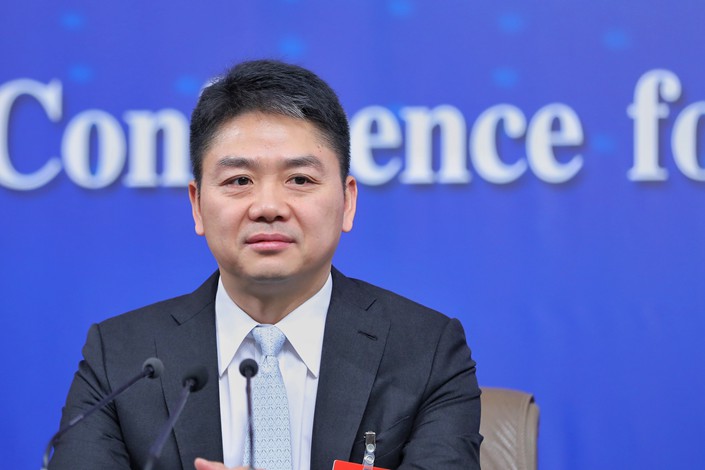 JD.com's shares have lost nearly half their value from early June, since reports emerged that founder and CEO Richard Liu (pictured) had been detained in the U.S. Photo: VCG

*The 21-year-old university student who alleges she was raped by JD.com CEO Richard Liu texted a friend on the night of the alleged assault, saying that Liu had forced her to have sex with him even though she was ‘not willing,’ Reuters reports

*The police went to her apartment the next morning, after being alerted by her friends. While she did not press charges in Liu’s presence at that time, she would accuse him of rape in front of police and university representatives following a forensic examination, according to the report

(Beijing) — Shares of China’s No. 2 e-commerce company JD.com Inc. sank to a fresh low not seen in nearly two years after Reuters published one of the most detailed reports to date of what happened on the evening of an alleged rape by founder and CEO Richard Liu.

JD.com shares tumbled 7.5% on Monday in New York, and have now lost nearly half of their value from a peak in early June. About a third of those declines have come since the start of this month, shortly after reports first emerged that Liu, also known as Liu Qiangdong, had been detained and later released in the U.S. state of Minnesota on suspicion of rape.

The investigation centers on a boozy banquet that took place in late August and an alleged rape afterwards of a 21-year-old University of Minnesota student, according to a Reuters report. Liu had been at the University of Minnesota at that time to attend a brief business doctoral program run by the school jointly with Tsinghua University, China’s top sciences university.

Liu is one of China’s richest men, and is among an elite group of internet entrepreneurs who are some of the country’s most recognizable personalities. Among that group, Liu is noteworthy for his rags-to-riches past that saw him rise from countryside roots to fame and fortune after attending the prestigious Renmin University in Beijing and starting his own business.

According to the Reuters report, the 21-year-old woman sent a text message to a friend in the middle of the night the alleged rape occurred, saying Liu had forced her to have sex with him.

“I was not willing,” she wrote in a Chinese text message around 2 a.m. on Aug. 31, according to the Reuters report. “Tomorrow I will think of a way to escape.” An attorney for the woman confirmed the authenticity of the messages to Reuters.

A JD.com spokeswoman directed Caixin to the company’s corporate blog, which includes a section on the case without any updated comments since Sept. 6. Liu’s U.S. attorney, Jill Brisbois, did not immediately respond to an emailed request for comment, but told Reuters via email that the allegations against Liu  “are inconsistent with evidence that we hope will be disclosed to the public once the case is closed.” Liu has previously denied any wrongdoing.

Last week police wrapped up their investigation into the case and submitted their materials to the local district attorney, who will decide whether or not to file criminal charges.

Reuters said it could not identify the alleged victim, but added she was from China. Caixin previously reported that Liu had attended a boozy party with others the evening of the alleged crime. Reuters reported about two dozen people were present, around 20 of them men. The party wound up around 9:30 p.m. on Aug. 30 with a final tab of about $2,200. The alleged victim later told one of her friends she had felt pressured to drink, and said in a text message: “It was a trap,” adding later that “I was really drunk.”

The pair ultimately ended up back at the woman’s apartment, sources with knowledge of the matter told Reuters. According to the police report the alleged rape took place at about 1 a.m. Police later came to the apartment early that morning, after being notified by one of the woman’s friends. But the woman declined to press charges in Liu’s presence, Reuters reported.

The woman would later go to a hospital for a sexual forensic test, and at a university office would accuse Liu of rape in front of police and university representatives. Liu arrived at the office around 11 p.m. that evening, and was released 17 hours later without paying any bail. He later returned to China.