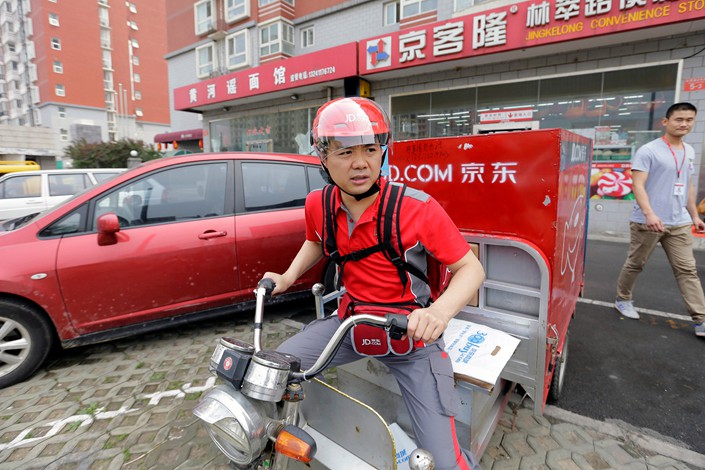 Richard Liu, founder and CEO of JD.com Inc., prepares to deliver goods for customers in Beijing to celebrate the anniversary of the founding of the company, in June 2014. Photo: VCG

JD.com Inc. founder and CEO Liu Qiangdong attended a boozy dinner at a Japanese restaurant the night he is alleged to have committed rape, sources told Caixin.

The Chinese billionaire, who also goes by Richard Liu, was taken into custody by police in Minneapolis, Minnesota, on Aug. 31 at about 11:30 p.m. local time and released without bail the next day at around 4 p.m., police said.

On Thursday night, Liu attended a dinner with around 20 others at Origami, a Japanese restaurant about 20 minutes by car from the University of Minnesota, a restaurant employee said. Liu was in the city to participate in a weeklong residency at the university for a Ph.D. program.

The group, several of whom were women, racked up a $2,000 bill, drinking around 18 bottles of red wine and 20 bottles of beer, the restaurant worker told Caixin. A man around 170 centimeters (5 feet 7 inches) tall had to be carried out of the restaurant because he was so drunk, the employee told Caixin. The group left around 9.30 p.m.

Liu — who has since returned back to China — was arrested about 24 hours later in a building that is part of the University of Minnesota’s Carlson School of Management, according to several sources.

Liu’s residency was part of a program tailored for Chinese entrepreneurs that is offered by the school in partnership with China’s prestigious Tsinghua University.

The police previously identified Liu’s offense only by the term “sexual misconduct,” which covers a range of sexual crimes. But on Tuesday, the Minneapolis Police Department released an updated report on the case, which said Liu was arrested on allegations of “Criminal Sexual Conduct — Rape.”

Liu attorney Joseph Friedberg has said his client is unlikely to be charged as Liu was released after only 18 hours, without bail and without his passport being confiscated.

Another of Liu’s attorneys, Earl Gray, has said his client didn’t commit any wrongdoing.

On Tuesday, Liu appeared in public at his company’s Beijing headquarters, where he announced a partnership with Shandong Ruyi Group, a textile and clothing company.

Liu, who was born to a peasant family in East China’s Jiangsu province, become one of China’s richest men by establishing his e-commerce giant JD.com, which is listed in the U.S. with a market value of around $40 billion.

On Thursday, JD.com gained 3% before the market opened, following loss of around 11% on the previous trading day.