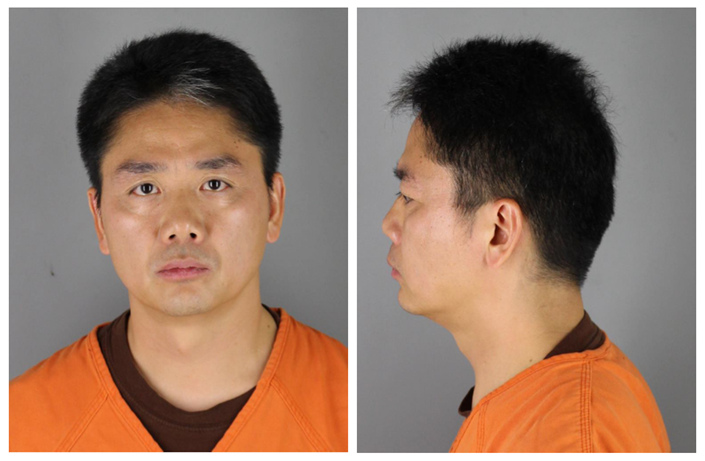 Mug shots obtained by Caixin of Liu Qiangdong, or Richard Liu, taken during his detention in the U.S. state of Minnesota. Photo: Hennepin County Sheriff's Office

* Police in Minneapolis say they are still investigating the case, and no charges have been filed

* Some stock traders express concern about the effect the incident will have on JD.com’s shares when U.S. markets reopen Tuesday

The 45-year-old Chinese billionaire entrepreneur Liu Qiangdong, who also goes by the name Richard Liu, was detained on suspicion of criminal sexual conduct on Friday at 11:32 p.m. U.S. Central time. He was released the next day about 4 p.m., according to a sheriff’s jail-roster record from Minnesota’s Hennepin County, which includes Minneapolis, the state’s largest city.

Liu is one of China’s richest men and among the country’s handful of internet celebrities who are household names for most Chinese. Others in that group include Jack Ma, founder of e-commerce giant Alibaba Group Holding Ltd., and Robin Li, founder of online search leader Baidu Inc.

“We’re still investigating the case. After the investigation, he may or may not be charged with a crime. It all depends what the investigation comes up with,” John Elder, a spokesman at the Minneapolis Police Department, told Caixin. He added it is still unclear how long the process will take, but that local police are “working very hard to get it done.”

In an earlier statement on its microblog, JD.com confirmed that Liu was investigated by police in an unspecified location during a business trip to the U.S. But it added that police had not uncovered any inappropriate behavior, and that Liu had continued on with his previously planned agenda.

When asked about Liu’s whereabouts, the Minneapolis police said they have no other details. “There’s no restrictions on his travel. That means he can go wherever he wants,” Elder said.

Liu, who was born in a remote village in East China’s Jiangsu province, became one of Chinese richest men by establishing his e-commerce company, JD.com, in the late 1990s. The company is now China’s second-largest e-commerce company, behind only Alibaba, and is listed in the U.S. with a market value of around $50 billion.

Liu is married to Zhang Zetian, who is 19 years his junior and is known to many Chinese as “Milk Tea Little Sister,” a nickname she received after a photo of her holding the popular beverage went viral online in 2009.

U.S. markets are closed on Monday for the Labor Day holiday. But investors have expressed concerns that Liu’s personal scandal could put pressure on the company’s shares, which have already come under fire this year.

Some members of Seeking Alpha, an online community for U.S. stock buyers, worried that JD.com’s shares may continue their recent downtrend when trading resumes on Tuesday after the holiday. “As if this stock hasn’t been beaten up enough,” remarked one user who uses the name of Derski. “Wonder what Tuesday will bring?”

JD.com’s stock has already dropped by around 24% since early this year amid waning interest in Chinese tech stocks among U.S. investors.

One Seeking Alpha investor named “scaron” sarcastically commented that Liu should stay focused on his work. “I think it is time for Richard to bring the wife with him on his business trip,” he wrote.

The case also comes at a time when many Chinese tech companies have been embroiled in a series of scandals, ranging from violation of user privacy to safety issues.

A hashtag translating roughly to “pictures involving Liu’s detention” has been one of the top trending topics on Weibo, China’s equivalent of Twitter, garnering nearly 300 million views since the scandal began. Many Chinese Internet users focused on Liu’s alleged infidelity.