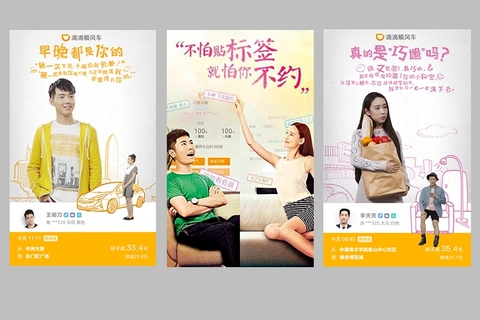 To attract more drivers and passengers, Didi advertised the "tagging" function of its Hitch service, which allowed users to post labels on each others' accounts. Photos: Didi

At one o’clock in the afternoon Aug. 24, a young woman in eastern China’s Zhejiang province got into a car she had booked on Didi, China’s most popular ride-hailing app.

Less than three hours later, she was dead after being raped and stabbed by the car’s driver, a 27-year-old man.

The woman’s death —three months after the similar killing of a flight attendant by a Didi driver in Zhengzhou, Henan province — has made Didi the target of public fury.

A Chinese hashtag calling for Weibo users to delete the Didi app from their phones topped the social media platform’s trend charts for days last week, and Didi has been summoned to meetings with central and local government authorities, who said the company had “unshirkable responsibility” and demanded an overhaul of Didi’s Hitch car-pooling service, which both victims had used.

On Tuesday, Didi Chief Executive Officer Cheng Wei and President Liu Qing issued a public apology, saying that “vanity” and “non-stop riding on the force of breathless expansion and capital” had helped to cause the Zhejiang passenger’s death . The Hitch service has been suspended indefinitely.

Didi was founded in 2012 and rose to dominate China’s ride-hailing industry after winning costly subsidy wars and absorbing rivals, including Uber China in 2016. But the company’s “eagerness to win overtook its initial intentions,” Cheng and Liu said in a letter to the public.

This included Didi’s failure to enforce its own standards on driver and vehicle qualifications, Caixin has learned. It’s possible for unqualified drivers to “whitewash” their credentials to gain acceptance, sources told Caixin. On Aug. 24, the company’s passenger-safety systems proved ineffective as the victim’s texts to friends asking for help before her death went unheeded, and even local police were unable to obtain real-time information from Didi.

Passenger safety is a challenge for every company in the ride-hailing industry, and U.S.-based companies Uber and Lyft have been involved in more than 100 sexual assault or abuse cases since 2018, CNN reported in April.

But critics have charged that Didi – and its Hitch service in particular – have long appeared to encourage drivers to view their passengers in a sexualized, objectifying way.

Hitch was launched in June 2015 as a way to allow drivers to share their vehicles with passengers headed in the same direction for less than the fare of a similar normal taxi ride. It quickly became more profitable than many of Didi’s other services, which include regular ride-hailing and airport limousines, thanks to its lower operating cost. In the service’s first few months, passengers were also attracted by offers of subsidized and even free rides.

But when Didi attempted to wean users off the costly subsidies, the number of Hitch transactions each day began to fall. Huang Jieli, the former general manager of Hitch, who was fired last week , thought she had stumbled onto a solution to this problem when she realized that female passengers were 10% more likely than male passengers to successfully obtain rides from predominantly male drivers.

Huang decided to allow Hitch users to view each other’s gender and profile photos, as well as tag each other with descriptions that frequently focused on women’s physical appearance.

Huang even told the Chinese news site Netease in a 2015 interview that “Hitch is a very sexy situation.” In the wake of the latest passenger murder, that interview has resurfaced in Chinese media reports that also point out Didi’s past use of dating- and sex-themed advertising for Hitch.

“This encouragement of sexualized socialization, without regard for the obligations of public service and safety, has attracted a large number of potential predators to the platform,” an analyst told Caixin.

After the May killing in Zhengzhou of Hitch passenger and flight attendant Li Mingzhu, Didi removed the tagging and profile photo functions from Hitch and no longer allowed drivers to accept orders from passengers of the opposite sex after 10 p.m. But Caixin learned from multiple Didi drivers that the tagging and photo functions had been quietly returned shortly before last week’s passenger killing.

Didi has long failed to verify drivers’ identities and bar drivers who don’t meet official requirements — such as residency in a given city or the absence of a criminal record — from signing up as ride providers.

In China’s capital, for example, drivers for Didi’s regular ride-hailing service must be registered residents of Beijing, and their vehicles must also be registered in the city. But the manager of a Beijing-based car rental company that rents cars to Didi drivers told Caixin that, based on his experience, only one in 10 of current Didi drivers had an official Beijing household registration, or hukou.

One such chat group, the “Unlocking and Whitewashing Business Group” was established in 2014 and mostly catered to drivers with insufficient years of driving experience, vehicles that were too old, or “inconsistent vehicle types,” according to group administrators. Caixin also found an operator who said his “current order volume was large, so urgent orders would not be entertained,” a sign that this underground business is booming.

The latest passenger murder has prompted a crackdown by Didi on drivers who have criminal records, and many drivers who have previously received customer complaints have been locked out of their accounts. But while “express whitewashing” was currently unavailable, “slow whitewashing,” which would take several days, was still available when Caixin asked one agent.

Every time Didi launches a crackdown, “only the symptoms are treated, and the root cause is that Didi never completely changes the socialization aspect of Hitch’s product design,” a source close to the company told Caixin.

The problem is a fundamental contradiction between Didi’s business model and its obligation to be selective when accepting drivers. The more selective Didi is, the fewer drivers it has — and the lower the supply of rides on the platform, which has depended on amassing an enormous fleet to attract passengers and overwhelm rivals.

There were many warning signs before last week’s Didi passenger killing.

The day before the killing, a passenger had reported the driver, surnamed Zhong, for harassment. But, on the day of the killing, Didi allowed Zhong to accept passengers’ bookings without warning passengers in any way.

During the fatal ride on Aug. 24, Zhong took the car far beyond the path suggested by Didi’s navigation service, but this, again, failed to trigger any safety mechanism on the Didi platform.

Around an hour into the ride, Zhao , the passenger, texted friends saying the driver had taken her into a deserted mountainous area, and asked for help. Weibo user Super_4ong, who described himself as a friend of Zhao’s, said he attempted to contact Didi’s customer service platform seven times that afternoon but was told repeatedly that frontline customer service staff had “no authority” to take action.

Meanwhile, local police in Wenzhou, Zhejiang, received a call from another friend of Zhao’s. But when police attempted to submit an inquiry on Didi’s customer service hotline, they were forced by the Didi system to wait nearly two hours for information on the driver, according to information released by the police.

One Didi insider told Caixin that the company had an opportunity to prevent the tragedy when it received the earlier passenger complaint. But customer service failed to act on it.

“But there is too much information every day, and there is a lot of misinformation,” the contractor said. So, information that appears in only one complaint “does not attract enough attention.”

But the problem has deeper roots, according to Chen Yuefeng, deputy dean of law at the East China University of Political Science and Law in Shanghai.

“The licenses that should’ve been taken were not taken; the supervision that should’ve been accepted was not accepted; and a large number of vehicles in operation have not been included in regulatory platforms,” Chen said. “Didi is not just condoning [non-compliance with regulations], it is doing it on purpose.”

Didi did not offer comment when Caixin contacted the company to ask about its passenger safety system and drivers who sign up using fake qualifications or use “whitewashing” techniques.