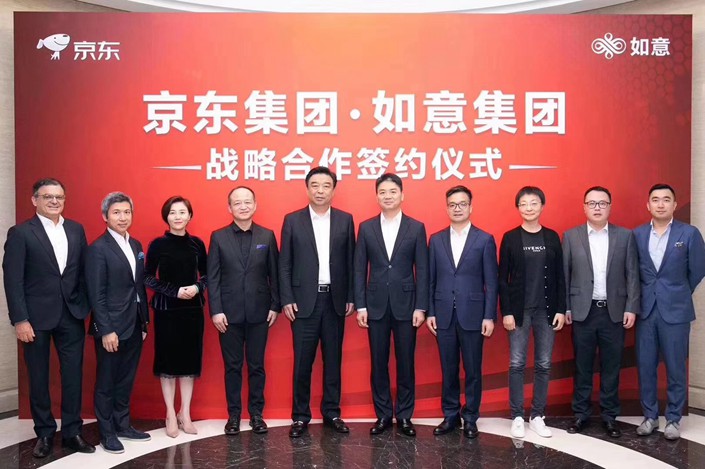 * Following his arrest and release in the U.S., Liu returned to China, where he attended a company event on Tuesday

(Beijing) — The attorney of JD com Inc. founder and CEO Liu Qiangdong told Caixin his client is unlikely to be charged after he was arrested in the U.S. state of Minnesota following allegations of criminal sexual conduct.

The 45-year-old Chinese billionaire, who also goes by the name Richard Liu, was taken into custody by Minneapolis police last Friday and was released the next day. Police have not identified the exact nature of the case, but a spokesman for the Minneapolis Police Department has said the investigation is ongoing.

“He was arrested and released after 18 hours. There was no bail, with no charges, and nobody asked him for his passport. Under those circumstances, it is very very rare for anybody to ever be charged,” attorney Joseph Friedberg told Caixin.

Friedberg said he was present when Liu was released on Saturday afternoon. But Friedberg said police hadn’t shared the exact reason for Liu’s arrest. “Anything I can tell you is that the booking sheet said he was arrested for some form of sexual misconduct. There were no details, I have not talked to the police and I have no intention of doing so,” he said.

Friedberg added that he didn’t know anything about any alleged victims, including who filed the police report.

In an official statement (link in Chinese) on Monday, JD.com said Liu has returned to China, and that the U.S. had found no misconduct in their probe into Liu. But the statement didn’t offer an explanation of the police’s statement about the ongoing investigation.

Liu appeared in public on Tuesday at his company’s Beijing headquarters, where he announced a partnership with Shandong Ruyi Group, a textile and clothing company that purchased a controlling stake in Swiss luxury-shoe and accessories company Bally early this year.

Police told Caixin they could announce the results of their investigation as early as Friday. “We are confident that we will be able to reconnect with him (Liu) as it becomes necessary,” said John Elder, a spokesman at the Minneapolis Police Department. He added that Liu’s release without bail didn’t imply that the police have a weak case or lack evidence.

Liu, who was born in a remote village in East China’s Jiangsu province, became one of China’s richest men by establishing his e-commerce company, JD.com, in the late 1990s. The company is now China’s second-largest e-commerce company, behind only Alibaba Group Holding Ltd., and is listed in the U.S. with a market value of around $50 billion. Liu is married to Zhang Zetian, who is 19 years his junior and is known to many Chinese as “Milk Tea Little Sister,” a nickname she received after a photo of her holding the popular beverage went viral online in 2009.

The arrest comes after Liu was in the spotlight earlier this year when the Australian media named him as the host of a 2015 party for Chinese businessman Xu Longwei. In July, an Australian jury convicted Xu of several charges, including having unconsensual sex with a woman who attended the party.

Liu has not been charged with any wrongdoing in this case, but tried to get the Australian courts to issue a suppression order to block the reporting of his connection to the incident. After an interim order was overturned on July 20, JD.com said through an attorney statement on July 25 that Liu was not familiar with Xu or the female victim, and it insisted Liu was not involved in the case.

U.S. markets were closed on Monday for the Labor Day holiday. But some investors have expressed concerns that Liu’s personal scandal could put pressure on the company’s shares, which have already come under fire this year.