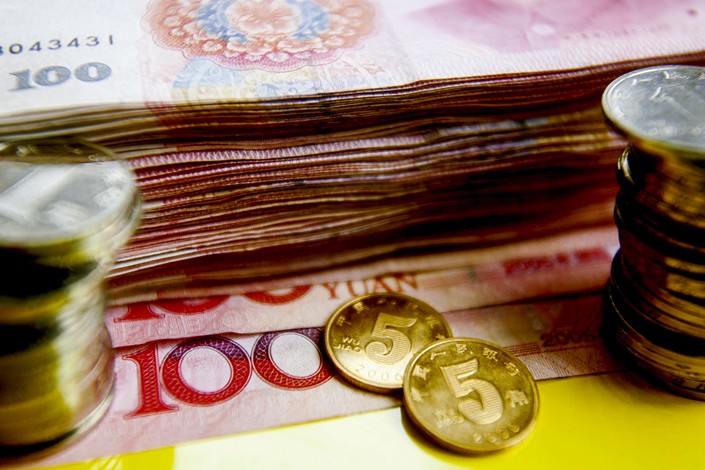 China’s central bank announced on Sunday that effective Oct. 15, it will cut the amount of cash that lenders must set aside as reserves. Photo: VCG

After this latest RRR cut, the reserve ratios of large and smaller deposit-type financial institutions will be 14.5% and 12.5% respectively. The RRR cut will release about 1.2 trillion yuan ($175 billion), of which 450 billion yuan will be used to repay the MLF due on Oct. 15. Another 750 billion yuan will be injected into liquidity. According to the official statement from the central bank, the purpose of this RRR reduction is to support the development of the real economy by reducing the financing costs of small and midsize enterprises, and to optimize the liquidity structure of commercial banks and financial institutions.

The macroeconomic background of this RRR cut is a further slowdown in the growth rate of the real economy.

If, as expected, China’s gross domestic product growth rate falls back to 6.6% in the third quarter of 2018, the fourth quarter may fall further to around 6.4%. The deepening Sino-U.S. trade frictions will further weaken the contribution of the import and export sector to economic growth. Once the export growth rate drops as a result of the trade frictions, it will affect the growth rate of manufacturing investment. The tightening regulation of real estate will lead to a gradual decline in the growth rate of real estate investment. At present, the central government’s practice of encouraging local governments to issue special bonds and encouraging commercial banks to purchase special bonds can only lead to a moderate rebound in infrastructure investment growth.

The financial background of this RRR cut is that small and midsize enterprises are still having great difficulty in financing their activity.

Although one of the purposes of the central banks’ two previous targeted RRR cuts was to promote financing for small and midsize enterprises, commercial banks in practice usually tend to reduce credit support for those enterprises. This is due to the increasingly strict financial regulatory environment and the banks moving off-balance-sheet assets back to their books. In the past few months, the growth rate of total social financing has been much lower than that of yuan loans, and the growth rate of the M1 money supply has continued to be lower than that of the M2 supply. Both reflect that the difficulty of financing for small and midsize enterprises may have not decreased but increased. To effectively reduce the difficulty of financing, on one hand, the central bank needs to maintain a reasonable and sufficient liquidity supply, while on the other hand, regulatory authorities need to grant regulatory support to financing activity, and also need to keep the equity market active. Without the cooperation of the latter two, it is difficult to achieve this goal only through the central bank’s RRR cut.

Recent events, including oil price hikes, the Shouguang floods, African swine plagues, Sino-U.S. trade frictions, and rising rents in first-tier cities have all boosted market expectations of economic stagflation. But as we pointed out in the previous report, these inflation events are all supply-side shocks. If there is no demand-side cooperation, there will be no great impact on inflation. The central level of CPI growth is expected to increase from 2.0% to 2.5% in the next year, but there is not much room for further growth. Although there are some long-term concerns of inflation (driven by the rebound in food prices), there is no near-term worry.

Meanwhile, the central bank also stressed that the RRR cut will not cause the yuan exchange rate to face significant depreciation pressure.

In fact, with the U.S. Fed’s continued interest rate hikes, the relaxation of China’s monetary policy will continue to reduce the interest rate difference between China and the U.S., making the yuan exchange rate against the U.S. dollar face depreciation pressure on the fundamentals. The above statement by the central bank indicates its belief that domestic targets will take precedence over external targets. And on the other hand, the central bank has the will and ability to maintain the exchange rate of the yuan against the U.S. dollar at a certain level. The reintroduction of the countercyclical factor has strengthened the central bank’s ability to influence the middle price. Various control measures for capital outflows also continue to strengthen. In addition, the central bank retains the ability to initiate foreign exchange reserve intervention and offshore market intervention. In view of this, we believe that the probability of the yuan exchange rate against the U.S. dollar exceeding 7 yuan per dollar at the end of this year is very small.

After this RRR cut, we expect that the probability of the central bank further lowering the RRR this year is small. The next RRR cut may come before the Lunar New Year holiday next year.

Zhang Ming is the chief economist of Ping An Securities Co. Ltd., and a senior fellow and the director of the Department of International Investment, Institute of World Economics and Politics, Chinese Academy of Social Sciences.