By Timmy Shen and Lin Jinbing 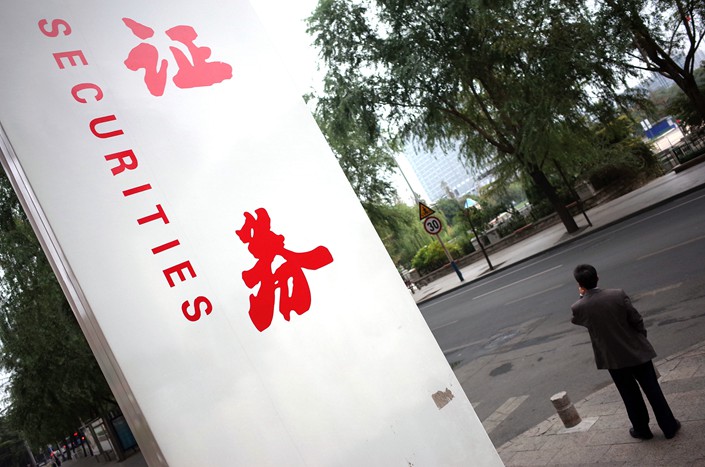 This year, the stock prices of 30 of the 39 brokerage firms listed in China have fallen by more than 30%. Photo: VCG

Shares of listed Chinese brokerages are plunging as the sinking stock market and falling trading volumes threaten to hurt their profits and potentially expose them to losses on billions of yuan of equities pledged as collateral by customers.

Of the 39 listed securities firms, 25 saw their prices slump by the 10% daily limit or close to it on Thursday. Soochow Securities, a small Shanghai-listed brokerage fell by the maximum 10%, while Guosen Securities, which trades on the Shenzhen exchange, fell by 9%. Larger firms escaped the worst of the rout, although Citic Securities, a state-owned brokerage that's the country's largest, dropped by 6.1%, and Huatai Securities dipped 5.6%. But that was only marginally worse than the benchmark Shanghai Composite Index which sank by 5.2% on Thursday following an overnight sell-off in the U.S. stock market.

Thursday's plunge in brokerage stocks deepens a slump that began in January. This year, the stock prices of 30 of the 39 listed firms have fallen by more than 30%, underperforming the benchmark index which has fallen by around 25%.

The turmoil on global stock markets, fueled by rising U.S. interest rates and the intensifying Sino-U.S. trade war, is spilling over into domestic markets where investors are already worrying about a slowdown in the Chinese economy. The gloomy outlook is prompting investors to flee the stock market and trading volumes on the country's two exchanges has slumped.

That's bad news for China's securities firms, because low trading volumes mean less commission income, on which many of the smaller brokerages rely for their profit.

Investors are also concerned about their potential exposure to the growing risks from the crisis in the pledged-share business, where shareholders offer stock as collateral for loans from securities firms. Recent regulatory tightening has constrained brokerages’ ability to sell pledged shares to recoup unpaid debt.

Rapid expansion over the last few years has left many securities firms with weakened balance sheets, but the stock market turmoil has made it more difficult for them to raise money.

Soochow Securities is one of the struggling companies. In August 2017, the midsize brokerage announced its intention to raise as much as 6.5 billion yuan ($939 million) through a rights issue. But in August 2018, after its shares had almost halved to 6.33 yuan, it said it wanted to scrap the plan and on Oct. 9 announced that the securities regulator had approved the move. The shares closed at 5.56 yuan on Thursday, below the firm's net asset value per share of 6.7154 yuan.

The stock market rout has also hit investors in Shanghai-listed Guotai Junan Securities' 7 billion yuan of convertible bonds which were issued in July 2017. Holders were allowed to convert their bonds into Guotai Junan's A-shares at a price of 20.2 yuan, which was later adjusted to 19.8 yuan. But the shares dropped from a peak of 21.38 yuan in January to 14.99 yuan by the end of September and the company disclosed on Oct. 9 that investors had converted less than 0.1% of bonds eligible for conversion into A-shares.

This story has been updated to reflect the situation at market close Thursday.