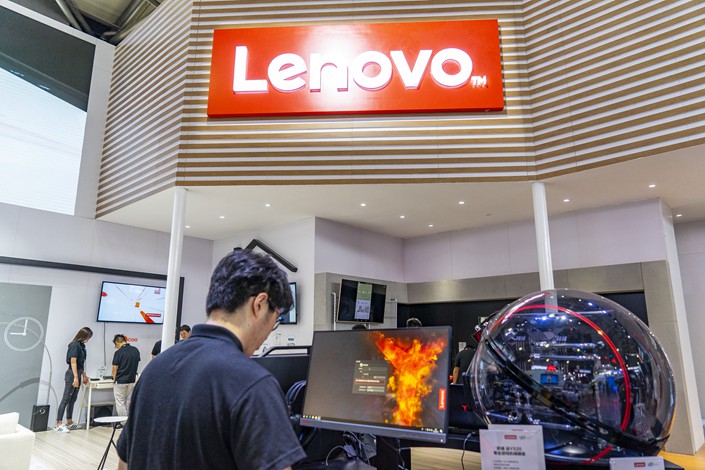 A Lenovo computer is displayed at the Lenovo booth at CES ASIA electronics show in Shanghai on June 14. Photo: VCG

Lenovo Group Ltd. regained its spot as the world’s largest PC-seller in the third quarter, new data showed on Thursday, in a rare piece of good news for a company that has been dogged by a stagnating PC business and inability to become a major smartphone player.

Lenovo controlled 24% of the global PC market during the three months through September, as its sales rose 5.8% from the previous year, according to data tracking firm IDC. That allowed it to pass previous leader HP Inc., which finished second with 22.8% of the market after its sales grew just 0.3%.

Data released the same day by Gartner, another major data-tracking firm, revealed the same shift with slightly different figures. That data showed Lenovo’s third-quarter PC shipments rose 10.7% to give it a 23.6% market share in the third quarter. That put it past HP’s 21.8% share, which came on the back of 6.2% growth.

Both Gartner and IDC cited Lenovo’s inclusion of the PC business from Japan’s Fujitsu through a joint venture in November as a factor that helped the firm retake the lead from HP. They also cited improving conditions in its commercial PC sales, as well as in its North America operations.

The overall global PC sector continued to post slow or no growth for the quarter as the industry matures. IDC said the industry contracted by 0.9% during the three months, while Gartner said it posted growth of just 0.1%.

The third quarter “came in better than expected,” said Jay Chou, research manager with IDC’s personal computing device tracker. “But the outlook remains uncertain as we head into the holiday season, when volume will be boosted by many consumer-oriented promotions in entry-level (models).”

Lenovo’s stock closed down 2.7% on Thursday amid a broader sell-off that saw the benchmark Hang Seng Index drop 3.5%. The company’s stock sank to a seven-year low earlier this year on concerns about its future, as its PC business posted slow growth and its newer smartphone business failed to find an audience.

It regained some momentum over the summer as its performance improved. But then its shares dropped as much as 25% on a single day late last week after Bloomberg Businessweek reported that Beijing had secretly implanted spying chips into motherboards used by some of the world’s largest companies. Lenovo later issued a statement saying Super Micro Computer Inc., the company at the center of the hacking chip investigation, was “not a supplier to Lenovo in any capacity,” and the company will take steps to protect the ongoing integrity of its supply chain.