Signs Suggest China May Tolerate Yuan Weakening Past 7 a Dollar 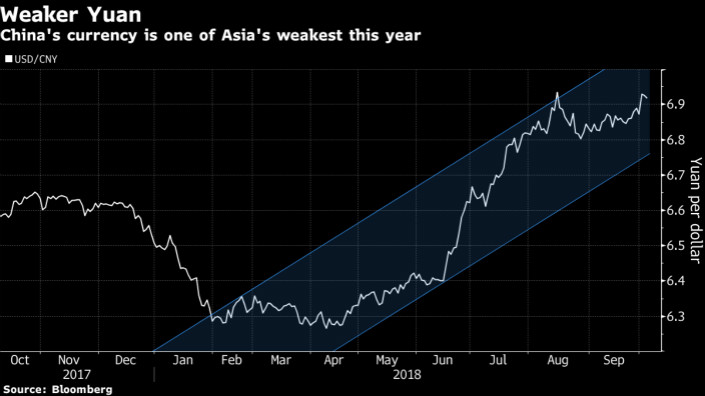 (Bloomberg) — There are growing signs China’s yuan may weaken past 7 per dollar, a key psychological level it hasn’t breached in a decade.

The latest came in a China Securities Journal commentary Wednesday, where former central bank adviser Yu Yongding said authorities should refrain from market intervention and that tolerance of yuan weakness is needed for exchange-rate reform. The currency has already crossed the long-defended level of 6.9 against the dollar and is near its lowest since 2008.

“Yu’s commentary is likely part of China’s efforts to shape expectation and prepare for the yuan to breach 7 per dollar, so that the market wouldn’t panic when it happens,” said Xia Le, Hong Kong-based chief Asia economist at Banco Bilbao Vizcaya Argentaria SA.

The depreciation has fueled concern in the U.S. — which is due to publish a report on currency manipulation next week — that China is deliberately weakening the yuan. At a briefing Tuesday, Foreign Ministry spokesman Lu Kang said there was no intention to use the currency as a tool in the trade dispute by devaluing it to stimulate exports. He also said U.S. concern over the recent weakness was “groundless and irresponsible.”

“China probably won’t let the yuan break the key 7 psychological level before the U.S. Treasury report, as it still intends to show goodwill and hopes not to escalate trade tension with a weaker currency,” BBVA’s Xia said.

The yuan has tumbled 9% against the dollar in the past six months. The decline has come as a trade war flared between the world’s two largest economies, and as their monetary policies continue to diverge. A further drag came Sunday, when the People’s Bank of China said it would cut the reserve requirement ratio, the fourth such move this year. Options trades show rising expectations the yuan will slide to 7 per dollar.

“If we see more such comments surface in the near term, there’s a chance that the yuan will keep weakening,” said Gao Qi, a Singapore-based currency strategist at Scotiabank, referring to Yu’s remarks. “A break of 7, which may happen due to a strengthening dollar rather than China guiding the yuan lower, will likely lead to larger volatility in Chinese stocks and Asian emerging markets assets.”