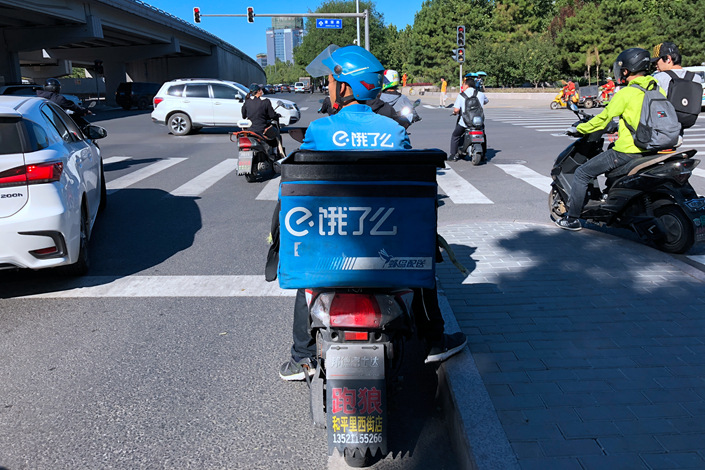 An Ele.me delivery driver stops at a traffic light in Beijing on Sept. 7. Photo: Wu Gang/Caixin

Ele.me CEO Wang Lei will head the new business and will directly report to Alibaba CEO Daniel Zhang, who will succeed incumbent Chairman Jack Ma in less than a year, according to a company statement.

The Ele.me-Koubei merger is set to launch an offensive against the newly Hong Kong-listed Meituan Dianping, the sector’s goliath. It was formed after Meituan’s $15 billion merger in 2015 with top rival Dianping, which operated an app similar to U.S. online restaurant review site Yelp Inc.

Alibaba founded Koubei more than a decade ago as a restaurant rating and local services search site. But Koubei was not in full operation until June 2015 when Alibaba and Ant Financial Services Group, operator of mobile payment platform Alipay, jointly injected 6 billion yuan ($868 million) to revive the brand.

Alibaba took control of Ele.me in May in a deal that valued the 9-year-old startup at $9.5 billion as the e-commerce giant pushed into the hotly contested multibillion-dollar online food-delivery sector. The buyout is an important part of Alibaba’s “New Retail” strategy to connect online and offline retail spaces.