By Hou Qijiang and Timmy Shen 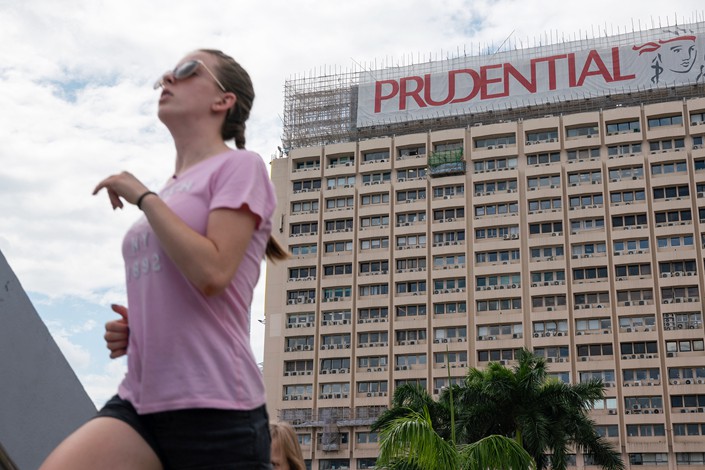 A woman runs past as a banner featuring the Prudential PLC logo in Hong Kong on Aug. 9. Photo: VCG

The value of Chinese outbound mergers and acquisitions (M&As) slumped in the first half of the year as countries that included the U.S., Germany and Australia imposed restrictions on deals, and China’s authorities tightened controls on overseas spending, business consultancy Bain & Co. said in a report released Thursday.

The depreciation of the yuan and fears of the impact of the trade war with the U.S. on profits and opportunities in America also took their toll, the report said.

The value of outbound deals plunged to $22 billion from $56.7 billion in the first half of 2017, a 61.2% drop, and fell from $118.7 billion in the same period in 2016, the Boston-based business consultancy said in its report. In the Asia-Pacific region, Chinese companies accounted for only 14% of M&A deals in terms of value in the first half of this year, compared with more than 40% in the 2015-17 period.

Despite the decline, China’s outbound investment boom will continue as companies “look to capture new capabilities that strengthen their domestic position while also growing overseas for a leadership position in industries in which they can gain a competitive edge,” according to the report.

Mounting trade tensions with the U.S. are hurting Chinese companies’ M&A ambitions in the country, Bain said, adding that businesses need to make tactical adjustments over the short term and put in place a strategic, longer-term approach.

“For the near future, it makes sense to put U.S. acquisition plans on hold,” the report said. “As a short-term measure, many are now pivoting to Europe and other non-U.S. developed markets” to buy companies that have the technology they need.

“For the longer term, Chinese companies need to stay the course. Make necessary adjustments to M&A strategy that consider different scenarios — and sketch out different contingency plans for different durations of time that the trade wars could last.”

Chinese companies’ direct investment in the U.S. dropped 62.1% in 2017 to $6.43 billion, according to figures from China’s Ministry of Commerce, as President Donald Trump’s administration tightened scrutiny of deals and acquisitions.

The Chinese government also introduced tougher screening of Chinese outbound investment starting in 2016 as part of efforts to stem the depreciation of the yuan and prevent capital flight.

As deals in the U.S. slowed, Chinese companies switched their focus to Europe and Africa, which saw a surge in investment. In 2017, they made deals valued at $18.46 billion in Europe, 72.7% more than in 2016, ministry data show. Chinese investment in Africa jumped 70.8% to $4.1 billion.

Bain’s report highlighted several trends in outbound M&A, including a surge in investment by private enterprises and a shift in focus away from natural resources sectors to technology media and telecommunications, health care and alternative energy.

Privately owned companies have become much more active in making overseas acquisitions and are showing faster growth than state-owned companies, the report said, “Chinese state-owned enterprises face more careful scrutiny than private companies and as a result, the deal volume of private enterprises has grown more quickly,” Hao Zhou, a partner in Bain’s Hong Kong office, said at a briefing in Beijing on Thursday.

Chinese companies are also becoming smarter in their overseas ambitions, learning from past mistakes and taking a more-rigorous approach to deal-making, the report said. They are also taking a more sophisticated approach to how they integrate and manage their acquisitions, increasingly opting for lighter control and influence on day-to-day operations and focusing more on strategy and governance.