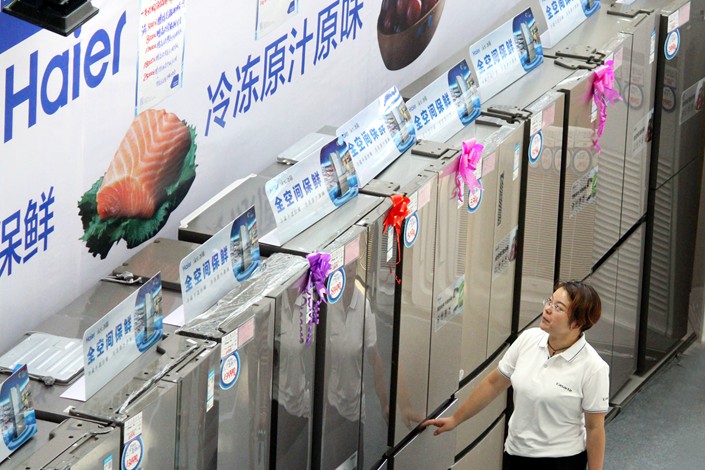 Appliance giant Qingdao Haier Co. Ltd. on Friday announced the pricing for a new offering of shares in Germany, aiming to raise as much as $700 million as it becomes the first company to list on a newly launched European board for Chinese firms.

Haier set a price range of 1 euro ($1.16) to 1.5 euros for the up to 400 million shares it plans to issue, according to a company filing (link in Chinese) to the Shanghai Stock Exchange. About 265 million shares will be sold in the initial listing, with the remainder in an overallotment option if demand is strong.

That would translate to as much as nearly 600 million euros in fundraising if demand is strong, well below the $1 billion that some media previously reported the company had originally hoped to raise. Germany’s Deutsche Bank AG is acting as the global bookrunner for the deal, with UBS Group AG, JPMorgan Chase & Co. and China’s CICC Ltd. acting as joint bookrunners.

The company plans to start offering shares on Monday and will continue through Thursday, with trading set to begin on Oct. 24.

The float will make Haier the first company to be listed in Frankfurt under a program sponsored by the China Europe International Exchange AG (CEINEX), a joint venture set up in late 2015 by the Shanghai Stock Exchange, German stock exchange operator Deutsche Boerse, and the China Financial Futures Exchange.

The program aims to help Chinese companies with worldwide aspirations raise their global profiles, and also to tap international financial markets. It dovetails with a broader Chinese push to make its own stock markets and publicly listed companies more accessible to foreign investors. CEINEX announced in April that Haier will be its first listing candidate, and last week the Chinese firm gave some of its initial plans for the issue.

CEINEX’s partners have said companies wishing to issue D-shares should be either involved in advanced manufacturing or in projects related to the Belt and Road Initiative — President Xi Jinping’s plan to strengthen trade ties with countries in Asia, Africa and Europe, primarily through infrastructure investment and construction. Other requirements include having a clear strategy for internationalization, high-quality information disclosure, existing arrangements for doing business in Europe, and a policy of paying dividends.

Haier is one of China’s most successful companies in terms of building a global brand and developing overseas operations. The company made headlines last week when it announced it will purchase Italian washing-machine maker Candy SpA for 475 million euros. Its largest purchase to date saw it buy the appliance unit of U.S. rival General Electric for $5.58 billion in 2016.