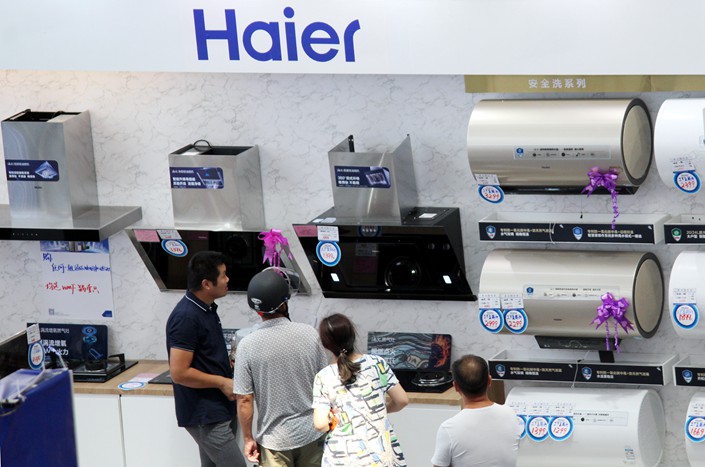 Leading home-appliance maker Qingdao Haier Co. Ltd. has submitted a plan to become the first Chinese firm to issue shares for trading in Germany next week, under a new program aimed at boosting global investors’ access to China-listed companies.

Haier, one of China’s most successful global success stories, will issue 400 million D-shares starting around Oct. 15, pending regulatory approval, the company said in a statement to China Europe International Exchange AG (CEINEX), which is sponsoring the program. It did not give a size of the funds it hoped to raise, but other media reported the amount would be nearly $1 billion.

Shares would be priced in euros, Haier said, without providing more specifics, including when the D-shares would start trading. Germany’s Deutsche Bank is acting as the global bookrunner for the deal, with UBS, JPMorgan and China’s CICC acting as joint bookrunners.

“By having a presence in Germany via a listing of D-Shares, Qingdao Haier intends to draw on capital markets to diversify its funding sources, optimize its capital structure and expand its investor base,” the company said. “Qingdao Haier also expects to leverage the D-Share listing to promote its global brand recognition and to support its business strategy and the further expansion of its global footprint, including, in particular, in the European home appliance market.”

Set up in late 2015 by the Shanghai Stock Exchange, German stock exchange operator Deutsche Boerse, and the China Financial Futures Exchange, CEINEX started operating in November and announced Haier would become its first Chinese listing back in April.

CEINEX’s partners have said companies wishing to issue D-shares should be either involved in advanced manufacturing or in projects related to the Belt and Road Initiative — President Xi Jinping’s plan to strengthen trade ties with countries in Asia, Africa and Europe, primarily through infrastructure investment and construction. Other requirements include having a clear strategy for internationalization, high-quality information disclosure, existing arrangements for doing business in Europe, and a policy of paying dividends.

“We are delighted to welcome Haier as the first Chinese blue-chip company on the Frankfurt Stock Exchange,” said CEINEX co-CEO Chen Han in a statement. “This is an important step for CEINEX on its way to establish its platform as a link between European and Chinese financial markets.”

Chen added that Haier is well-suited to list in Germany due to its global aspirations, which include a number of major acquisitions. The company made headlines last week when it announced it would purchase Italian washing-machine maker Candy SpA for 475 million euros ($545 million). Its largest purchase to date saw it buy the appliance unit of U.S. rival General Electric in 2016 for $5.58 billion.

Chen said Haier is “just that type of” high-quality manufacturer with global aspirations that CEINEX is looking for to become listing candidates.

“They are seizing their opportunity to develop into a truly global enterprise not even in terms of worldwide market share but also in terms of European capital market access to support their long-term development strategy,” Chen said. “Haier’s D-Share IPO is a first promising step for the D-Shares Market on the Frankfurt Stock Exchange and we welcome more Chinese blue-chips to issue D-Shares in the future.”

The D-Share launch is just the latest step by China to make its companies more accessible to international investors. Overseas buyers can already purchase shares of many Chinese companies through listings in Hong Kong and New York, and mainland-listed shares are also available to such investors through several other programs of limited scope.

That campaign has borne fruit this year as China’s stock markets have been included in emerging market indexes compiled by two of the world’s top players, MSCI Inc. and FTSE Russell. Lack of accessibility to foreign investors had been a major factor that led the two compilers to reject inclusion of Chinese stocks over the last few years.