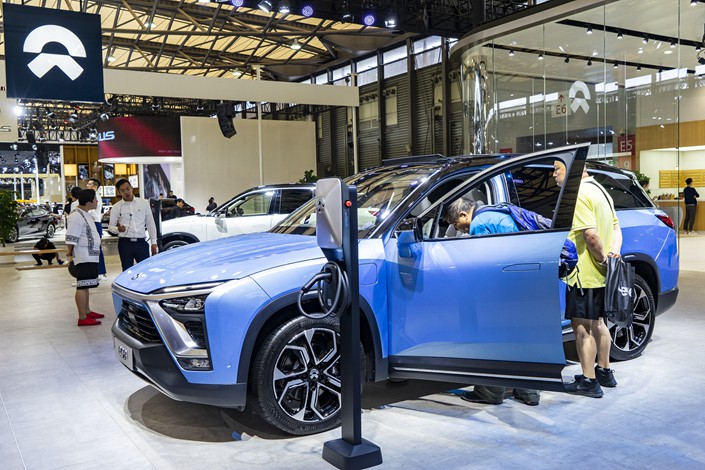 Automaker NIO showcases its electric vehicles at an auto show in Shanghai on Sept. 28. Photo: VCG

Newly listed electric vehicle (EV) startup Nio Inc. said its deliveries ramped up in September, adding it remains on track to meet an ambitious target for delivering 10,000 cars in 2018.

Nio delivered 1,766 EVs last month, up around 37% from the 1,121 vehicles it delivered in August, according to an announcement on Monday. The company began deliveries for its first model, the ES8, at the end of June and has been racing ever since to try and meet the 10,000 milestone in sales in 2018 that it previously promised investors.

“We are delighted that we have delivered more than 3,350 ES8s since beginning delivery on June 28, 2018,” Nio CEO William Li said. “Growing our monthly deliveries from 381 in July to 1,766 in September demonstrates our steady production ramp, strong demand from users and the initial acceptance of Nio as a premium brand.”

The latest sales figures translate to 3,268 vehicles delivered during the company’s third fiscal quarter, which outpaces its own internal target for delivering 2,900 to 3,000 during that time, CFO Louis Hsieh said.

“In addition, in observance of the China National Day one week holiday at the beginning of October, we temporarily shut down our ES8 production line for 10 days for routine maintenance and to install equipment for our second production line which we plan to use to meet the increasing demand for ES8s and for ES6 production, our 5-seater premium SUV targeted for release in June/July 2019,” he said. “While the planned production transition will slow our deliveries for October, it paves the way for accelerated production ramp in the future and we remain on track to achieve our delivery goal of 10,000 ES8s for the second half of 2018.”

Founded in 2014, Nio is hoping to cash in on China’s aggressive plans for electric vehicles, part of its broader plan to clean up the nation’s polluted air and promote development of cutting-edge technologies that can be exported. But those plans have been subject to frequent change as Beijing attempts to stop the abuse by some of generous government subsidies for automakers and car buyers.

Nio conducted nearly 13 billion yuan ($1.88 billion) in private fundraising through the end of last year from investors including social media giant Tencent Holdings Ltd. It raised another $1 billion through a New York initial public offering (IPO) last month, though the company had to sharply scale back its fundraising target after running into lukewarm demand from skeptical investors.

The company’s shares now trade about 25% above their IPO price, including a nearly 5% gain on Monday in New York after Nio announced its latest sales figures.