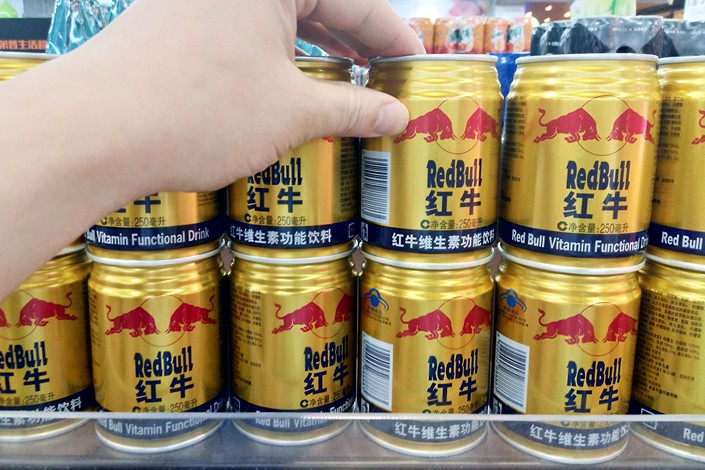 Red Bull Vitamin drinks are displayed at a supermarket in Nanjing, Jiangsu province, on May 18. Photo: VCG

The dispute surrounding popular energy drink Red Bull in China has entered a “Rashomon” phase in which no outsider can tell what has really happened: The Thai owner said the Chinese franchise rights’ 20-year deal has expired, but its Chinese partner said there are still 30 years to go.

The two sides have been locking horns since 2016 with media battles and legal fights. The Chinese partner, which operates local joint venture Red Bull Vitamin Drink Co. Ltd., added a twist to the saga by proclaiming in a statement Tuesday that the contract inked in 1995 granted it a 50-year agreement to manufacture and market Red Bull exclusively in China.

Red Bull Vitamin is 95% owned by two Thai companies related to T.C. Pharma, but operated by its Chinese peer, headed by a Chinese-Thai businessman, Chanchai Ruayrungruang, who introduced the drink to China in 1995.

The Thai owner said in a statement late Tuesday that as Red Bull Vitamin’s shareholders, T.C. Pharma’s two related companies never signed a 50-year contract, nor ever extended the original term beyond 20 years. The two companies are currently on the lookout for new partners in China and vowed to press on with local operations. Red Bull Vitamin reached the end of its 20-year-term of operations last month stipulated by the regulations, according to the government’s registry.

But Ruayrungruang’s team is planning to renew the company operations since it said it has an exclusive right to Red Bull in China for 50 years.

When asked by Caixin for comment, both China National Food and Shenzhen Sinohao said they didn’t know about the deal.

Red Bull Vitamin, meanwhile, told Caixin that the Shenzhen regulator in 1995 allowed companies with a foreign background to operate for no more than two decades, hence the operation term of 20 years. In 1998, it moved the firm’s registration records to Beijing, and had planned to renew the deal when it expired this year.