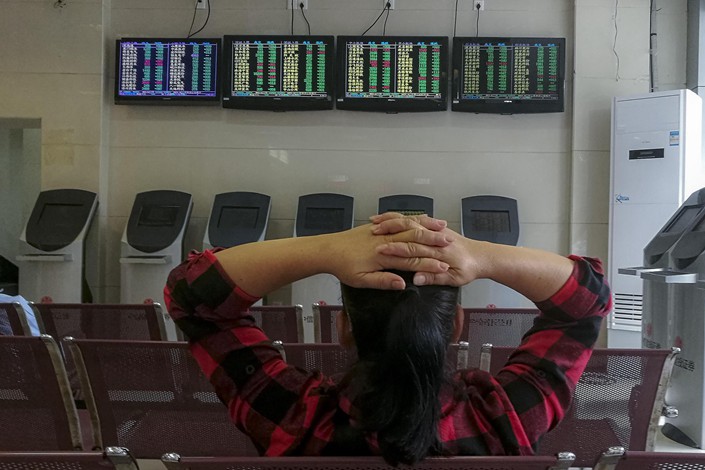 A woman sits in the client area of a securities trading company in Haikou, Hainan province on Oct. 18. Photo: VCG

With pressure mounting and anxiety setting in, China’s stock markets are anticipating the comeback of the “national team” (国家队guó jiā duì).

It’s not a reference to the country’s flailing soccer team that is the target of so much ridicule on social media, but rather Beijing’s crack squad of financial institutions who helped keep a stock market crash from turning into a collapse in 2015.

In the midst of that summer’s market turmoil, Beijing deployed a handful of state-backed financial institutions, including China Securities Finance Corp. Ltd., to stabilize the plummeting market. Orchestrated by the country’s top financial regulators, this group made large purchases of local stocks through a series of funds. The purpose of this group, dubbed the “national team” at the time, was to rebuild investor confidence in the markets. In total, they bought at least 200 billion yuan ($28.8 billion) worth of Chinese shares.

The Chinese government places great importance on stability of the stock market because the country has around 140 million individual stock investors. That’s more people than the total membership of the Communist Party of China. Last year, individuals held more than 99% of the investor accounts at the Shanghai Stock Exchange, according to exchange data. These mom-and-pop investors have paid a heavy price for the slide in stocks this year on the Chinese mainland, which has been one of the worst performers this year among major global markets.

Top financial regulators came out on Friday with different measures to stabilize the stock market. While there was no mention of the national team, “local teams” (地方队dì fāng duì) of institutions orchestrated by local governments have been encouraged to provide capital support to bail out listed local companies whose stocks have come under pressure in an ongoing pledged-share fiasco.

There has been much debate about whether Beijing should intervene so heavily in the stock market. Many of the national team’s key players were later investigated for insider trading and other irregularities in the wake of the 2015 market crash. The incident seriously undermined investor confidence.