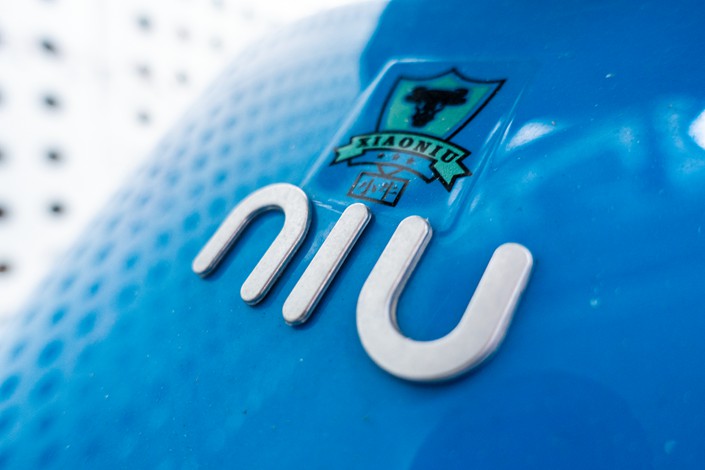 Niu Technologies closed down 3.9% at $8.65 on the Nasdaq Stock Market on Friday, after raising $63 million by offering 7 million American depositary shares at $9. Photo: IC

Shares in Niu Technologies, a Chinese manufacturer of electric scooters, fell almost 4% in their New York debut, but the company’s CEO said that the company’s investment in battery technology will pay off eventually.

On Friday, the Beijing-based company closed down 3.9% at $8.65, after raising $63 million by offering 7 million American depositary shares at $9, the low end of their range of $9 to $10. The downsized $63 million fundraising is less than half of the highest target mentioned in the initial listing plan, arriving amid lukewarm U.S. investor interest in Chinese tech stocks.

“To be honest, this is a tough market. … (but) we were still able to do this, and we are probably the only one, at this point, to get listed in the U.S.” CEO Li Yan said in a phone interview with Caixin on Friday before the market opened.

Founded in 2014, Niu differentiated itself by specializing in scooters powered by more-modern lithium ion batteries. The industry, especially in China, is still dominated by older, lead-acid batteries.

Last year, the company sold 431,500 scooters globally, according to an earlier prospectus. It didn’t disclose its exact China sales, but they are expected to be just a fraction of China’s electric bike market, in which 27 million units were sold in 2017, according to statistics provided by China Investment Corp.

“There is a trend for the industry to shift from lead-acid to the lithium ion battery technology,” Li told Caixin, adding that investors will favor the company’s environmentally friendly technology in the long run.

“When we meet our investors, do our roadshow, … they like our business, they understand we are tackling a long-term issue about urban mobility, how to move individuals more freely, more pollution-free around cities.”

In the prospectus, Niu cited statistics from China Insights Consultancy that predict that nearly half of the two-wheeled vehicles sold in China in 2022 will use lithium ion batteries, up from just 2.6% now.

Still, fierce market competition and a “smart” business model means that Niu is still burning a lot of cash. For the first half of this year, the company reported a net loss of 315 million yuan ($45.45 million) on revenue of 557 million yuan, up from the total of 185 million yuan for the whole year of 2017.

After listing, Li said his company will ramp up efforts to expand overseas, including in Europe, India, and Southeast Asia.