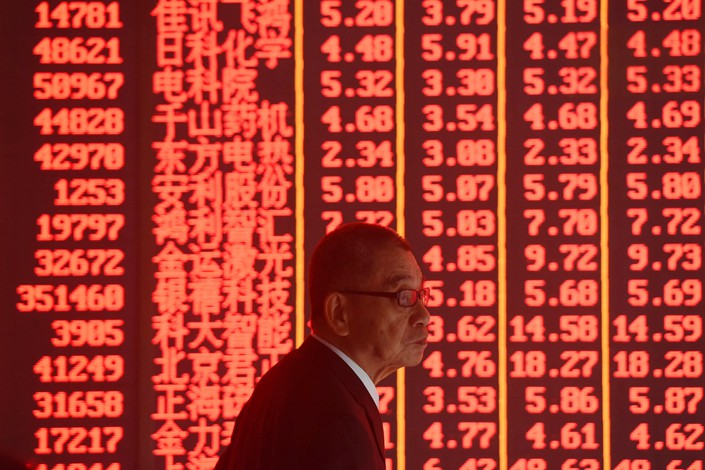 An investor watches the boards Monday at a stock exchange in the eastern city of Hangzhou. Photo: VCG

* Brokerages were the biggest gainers throughout the day on Monday, with all 33 listed securities companies in Shanghai and Shenzhen surging by the 10% daily limit

(Beijing) — China stocks posted their biggest gains in more than two years on Monday, extending a rally that has seen them rise nearly 7% in the last two trading days after top officials moved in concert to shore up confidence.

Brokerages were the biggest gainers throughout the day, with all 33 listed securities companies in Shanghai and Shenzhen surging by the 10% daily limit, including top firms Citic Securities Co. and Haitong Securities Co.

The rally that began on Friday came after a series of government officials stepped up and expressed support to stabilize a market that had been one of the world’s worst performers this year.

Before the rally, the Shanghai Composite Index had lost 30% of its value from a January high on growing concerns of prolonged trade frictions with the U.S. and anticipation of slowing economic growth. Pressure from a number of stocks that had been pledged as loan collateral and being sold due to slumping prices had also created a vicious cycle that had led to even more share sales, triggering several local rescue plans.

In a Sunday statement, President Xi Jinping vowed to offer “unwavering support” to the country’s private sector after the Financial Stability and Development Committee (FSDC), the cabinet-level body set up to defuse financial risks, added its voice to a growing chorus of high officials whose pledges of market support sparked the rally that began on Friday.

The meeting, the 10th gathering of the financial crisis team in two months, agreed that China’s economic policy should seek a “triangular support framework,” including a neutral stance on monetary policy, a vibrant corporate sector, and a well-functioning stock market. The government will continue to support the stock market as it plays a crucial role in stabilizing the economy, the financial system, and investor expectations, according to a government statement (link in Chinese) on the meeting.

Guo instructed banks to use “proper measures” when considering dumping shares that used loans for collateral, and called for insurers to set up products to rescue listed firms. Liu Shiyu encouraged local authorities and state-owned companies to perform similar roles to a “national rescue team” that helped stabilize the stock market during a major sell-off in 2015.

“The message from China’s top regulators is very targeted to tackle the source of volatility,” said Carie Li, an economist at OCBC Wing Hang Bank. Li said all the comments may restore market confidence, but fundamentals will be required to power a sustainable rebound.

He said that banks and the People’s Bank of China will discourage banks from favoring state-owned enterprises over private companies, and relax requirements for loans to the private sector to address fundraising difficulties among private firms.