How Young Chinese Worked Out a New Way to Keep Fit 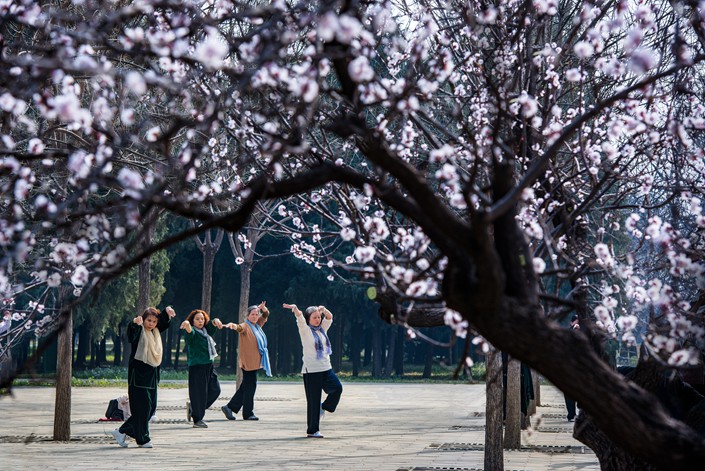 Elderly women dance while surrounded by apricot flowers at Beijing's Temple of Heaven park in Beijing on April 11. Photo: VCG

*Younger Chinese urbanites are increasingly choosing to exercise in private gyms, rather than following their parents and grandparents by working out in public parks

*While individual choice is becoming more prevalent, the need to socialize while sweating seems to be just as important for young Pilates class-attendees as it is for elderly tai chi practitioners

(Beijing) — Chinese park culture is so distinct that Jeremiah Jenne leads tours of it.

The Beijing-based American historian dedicates roughly half of his Temple of Heaven walk to the gardens surrounding the iconic landmark, describing Chinese park pastimes to the English-speaking tourists he guides. Different corners of the famous park, he points out, are occupied by different tribes: In one part, groups practice tai chi. In another, men and women perform acrobatics on shared gym equipment. Around the corner, teams play hackey-sack. A few regulars show off their unusually well-defined pecs.

While unique enough to be a subject of fascination for tourists, it’s a fairly common scene in Chinese cities. So common, in fact, that a recent report by the Lancet Global Health shows that China bucks the trend of growing leisure-time inactivity in adults worldwide, largely thanks to “increased park use and physical activity among China’s rapidly growing elderly population.”

“For earlier generations, home wasn’t always a comfortable space to hang out,” Jenne tells Caixin. “It was just a function of the time. Many people in Beijing lived in smaller apartments or other dwellings sometimes with multiple family members or generations. If you wanted to do something, especially as a group, you headed to the street or, if possible, a local park.”

But that may change. The vast majority of people exercising in parks are older, and today, fitness habits are subject to a generational divide. With a younger generation, and a more modern China, Chinese exercise culture is changing. Young people are increasing turning to private spaces for fitness.

Private gyms are not new to the country, but the past couple of years have seen unprecedented growth: Over 2016 and 2017, over 37,000 fitness clubs opened, according to a report by the Chinese Athletic Association. And the offerings are becoming increasingly diverse.

As such, a service that helps consumers keep track of it all is doing big business in Beijing and Shanghai. Through Guava Pass, which launched in the Chinese mainland in 2016, members can pay a set fee to access classes at different gyms across their city, which they book online. Classes on offer include everything from cycling and boxing to meditation, aerial yoga and pole dancing.

“GuavaPass believes that fitness centers are continuing to grow in popularity in major Chinese cities such as Shanghai and Beijing,” says Diane Chia, general manager, GuavaPass China and Malaysia. “GuavaPass expanded to China because we identified an exciting opportunity to enter the market as fitness and wellness was on the rise.”

“Just having ordinary gyms is not enough. We’re past that. People want more,” says Kat Tsang, as she sits on a plush orange cushion in a swanky, brightly-colored spinning studio in Beijing.

Tsang, studio marketing manager in Beijing for Taipei-based SpaceCycle, has been working in fitness for years. As such, she has had a first-row seat to the industry’s growth — and transformation into a luxury lifestyle product.

Nothing is more emblematic of the trend than her own employer, SpaceCycle. Over the past two years, the company has opened its massive, state-of-the-art studios in high-end retail spaces. Tsang speaks to me from the third floor of Beijing’s Taikooli North, which is dedicated almost entirely to high-end fashion labels, including the likes of Miu Miu and Alexander McQueen.

The studio, which charges 258 yuan ($37) per one-hour class (though class passes are cheaper when bought in bundles), caters to high-earning young professionals who demand more than the tired treadmill-and-dumbbells formula. Spin classes at SpaceCycle take place in high-tech rooms with floor-to-ceiling LED screens that flash eye-catching animations in time to the (blaring) music’s beat. Outside the spin rooms are well-equipped locker rooms with heating floors and a lounge.

“The founder of this brand never thinks that we’re a gym,” Tsang explains. “He thinks that we are the ‘third space’ for everyone. The first (and second) spaces are work and home. And then, SpaceCycle.”

Much like parks did for a previous generation, today’s fitness center is about more than burning calories — it serves an important social function.

The key difference, however, is that this social function has been commoditized. Whereas parks are open to all, gyms are costly. When asked about the disappearance of mass, public exercise in favor of personalized, often expensive leisure-time experiences, Tsang replies matter-of-factly: “That’s the signature of our generation. We want to have choices.”

Jenne adds that while “many younger people prefer gyms or jogging to park exercises,” others simply don’t exercise at all.

“Recent generations have the benefit, in many cases, of nicer living circumstances and it’s more comfortable to hang out at home,” he says. “People are even starting to socialize at home with friends, which is something that was quite rare before. People play video games, watch TV and other indoor activities.”

Meanwhile Jane Duckett, director of the Scottish Centre for China Research at the University of Glasgow, cautions that there are likely many reasons behind the shift: “The big change certainly is toward young people exercising, and toward exercising in gyms, which did not exist in the past, but that might be also because of concerns about pollution, or it might be a money, status thing.”

Tsang believes there’s more to it than that, pointing out that the rise in the popularity of fitness classes — as opposed to just open gyms — is directly due to young people’s desire to socialize outside of work and home.

“Technology is getting so crazy — you could just scan a QR code to get into a gym,” she says. And she’s right — China’s first “shared gyms,” which can be unlocked by scanning a code with your phone much in the same way you’d unlock one of the country’s ubiquitous shared bikes, opened last year.

“But what makes you stay?” she asks. “I think people.”